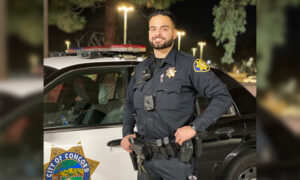 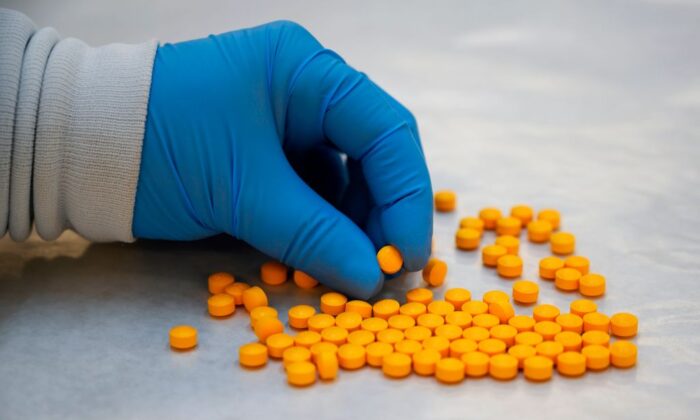 The amount of fentanyl seized at the U.S.–Mexico border in May from attempts to smuggle the drug into the United States has more than tripled since last year, according to the latest statistics from Customs and Border Protection (CBP).

Fentanyl is a synthetic opioid that’s blamed for an escalating overdose death rate in the United States. It’s most often manufactured in Mexico using chemicals supplied from China, and mixed with other narcotics to increase potency, as well as pressed into counterfeit pain pills commonly known as “Mexican oxys.”

In the past, fentanyl had mainly been mixed with heroin to boost the “high,” but now, it’s often pressed into small blue tablets and stamped with “M30” to closely match the color and markings of prescription oxycodone pills. Buyers may be unaware the pills contain fentanyl, of which a 2 mg dose can be fatal.

It comes amid a spike in illegal immigration in recent months. Border Patrol apprehended 180,000 illegal aliens in May, the highest total in 21 years. CBP officials say the majority, more than 112,000, were expelled under the Title 42 emergency health provision put in place during the Trump administration. The number of border encounters has been rising steadily since last October but surged in February after President Joe Biden took office.

“President Biden’s open-border policies have paved the way for dangerous gangs and cartels, human traffickers, and deadly drugs like fentanyl to pour into our communities,” Abbott said.

Derek Maltz, former head of the Drug Enforcement Administration’s special operations division, told The Epoch Times in March that cartels controlling the southern side of the border are “dominating the distribution of this poison.”

“It’s really, really alarming,” Maltz said, adding that he anticipates the “crisis” at the southern border will continue “on this escalating path.”

He added: “It’s really sad, because I’ve been communicating with a lot of parents who have lost their young kids, especially to the counterfeit pills. And it’s all coming from Mexico.”

A group of more than 50 House GOP lawmakers has called on Biden to remove Vice President Kamala Harris from her border assignment, noting that Harris is yet to visit the area.

“Despite being in the midst of a border crisis this country has not seen in two decades, Vice President Harris has not yet shown adequate interest in observing this crisis first-hand,” Rep. Glenn Grothman (R-Wis.) and 55 other lawmakers wrote in their letter on June 17. “In the 85 days since the Vice President has been tasked with solving this crisis, she has yet to visit the border and meet with Border Patrol agents, Immigration and Customs Enforcement (ICE) officials, and local law enforcement officials.”

The vice president has said that she’ll visit the border at some point.