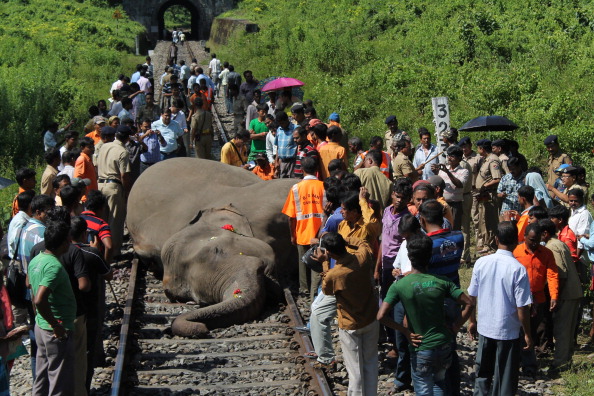 Indian villagers, along with forestry workers, look at the body of an elephant as it lies on the railway tracks after it was struck by a passenger train at Mongpong village, near Mahananda Wildlife Sanctury, some 25 kms from Siliguri on October 11, 2013. (Diptendu Dutta/Getty Images)
Environment

Female Tiger Run Down by Train in India

A nine-year old tigress was run down by a train between Ramnagar and Kashipur stations in Uttarakhand. The incident which is the first of its kind in Uttarakhand occurred in the early hours of the morning and the injured body of the big cat was discovered by villagers later on after sunrise.

Officials opine that foggy weather might have marred visibility and led to the death of the tiger.

“A Delhi-Ramnagar train passes through the area at 4 in the morning. On Friday, there was a dense fog in the area at that time. It seems the tigress was disoriented by the low visibility,” said Rahul Kumar, divisional forest officer of Terai West.

“This is the time of day when animals are quite relaxed, as human movement becomes minimal,” he added.

In the past, there have been incidents of leopards and elephants being hit by trains. However, tigers are usually very alert, agile and gifted with a sharp sense of hearing which helps them hear the sounds of an approaching train from far and escape getting hit.

Officials feel that the hapless big cat victim was perhaps hard of hearing. It is not unusual for tigers from Corbett Tiger Reserve to stray into this area and this one was probably one such tigress from there.

“There is dense vegetation on this stretch. There were tall bushes on both sides of the track, reducing visibility not only for animals but also for the railway driver, who did not spot the tigress,” Kumar said.

To prevent such accidents Mr. Kumar trains would use horns (a practice which is already in place) and proper lighting of the stretch.

While the railway officials have promised to take these measures, the Chief wildlife warden DVS Khati said that and official inquiry would be held after inspecting the accident site.

Khati ruled out fencing off the area or asking the railways to reduce the speed of trains on this stretch.

“Since this is an army area on one side and has agricultural land on the other, there is no possibility of fencing off the stretch. This is not a reserve forest, so railway authorities cannot be asked to lower the speed of trains. Using the horn can help alert animals,” he said.

This incident could be the first of its kind in Uttarakhand. None the less, officials and authorities must ensure that proper steps are taken to ensure it is the only such incident ever reported and help save the tiger numbers from further dwindling.

This article was originally written and published by Ramya Naresh, a contributing writer for indiasendangered.com. For the original article and more information, please click HERE.