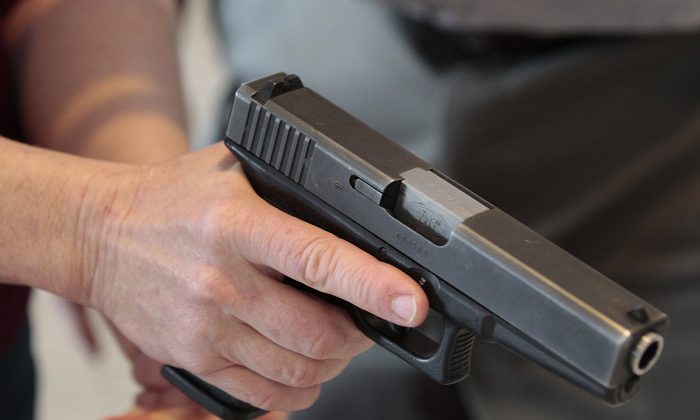 A Utah teacher is shown how to handle a handgun by instructor Clint Simon at a concealed-weapons training class to 200 Utah teachers on December 27, 2012 in West Valley City, Utah. (George Frey/Getty Images)
Crime and Incidents

A teacher from the Kenton County School district is accused of bringing a loaded gun to a middle school in Kentucky on Thursday, Aug. 17.

Principal Ray Stanley said that no one was hurt and the school building remained secure and safe in a message to parents, Fox19 reported.

Officials said they discovered the loaded firearm around 10:20 a.m.

Districted spokeswoman Jess Dykes told WLWT they had alerted everyone in the community.

“We want to make sure that we are communicating with the families, and our community members, as well as our students, about this incident and so we want to keep those lines of communication open,” Dykes said. “We have contacted families and students and parents of Turkey Foot and schedule pickup is still on tonight.”

According to sources, a female teacher had the gun but it was stolen out of her purse by a juvenile. Officials said it not clear if the juvenile was a student at the school or not.

The school season was not officially started until Aug. 23 but some students were returning to the school to pick up schedules on Thursday evening. Police patrolled the school during the evening as a safety precaution, Fox19 reported.

Parent Jeff Lyons was at the middle school Thursday evening to pick up information about his daughter’s cheerleading squad when he heard what happened.

“It was shocking to hear. Because it’s never going to happen to you and then today it happened to us,” Lyons told WLWT.

He said he planned to discuss gun safety with his daughter later.

“I fully support your right to carry a weapon, especially if you have a concealed carry, you can have it with you,” Lyons said.

The district told WLWT it was not sure if the teacher had a license to carry a gun, but said it didn’t matter anyway because it is illegal to have a firearm on any school property.

“With the shootings that happen in the school, I kind of support having teachers that are armed, but at the same time now that my daughter is in one of those schools that somebody’s brought a gun to, I’m not quite sure how to feel about it,” Lyons said.

The investigation is still in progress and the school employee is on administrative leave.

As of writing, no charges have been laid against the teacher until officials finish investigating the incident.

No other information has been released by district leaders.