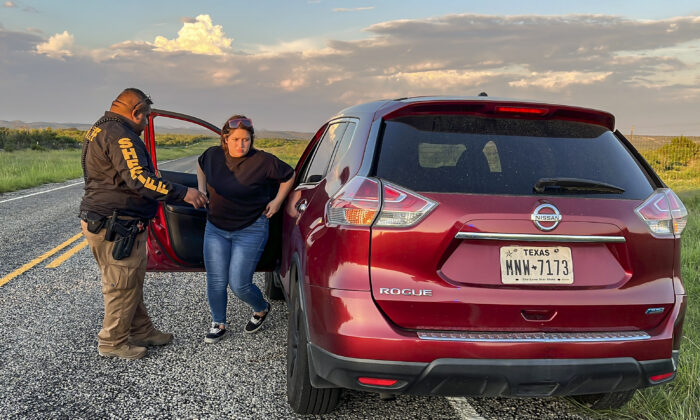 KINNEY COUNTY, Texas—Women who are caught smuggling illegal aliens through Texas’s Kinney County are essentially being given a long-term get-out-of jail-free card since the county jail can’t house women.

And many of those caught smuggling know that.

The sheriff’s deputies say female drivers they catch will tell them: “You can’t arrest me, you don’t have space for females.”

Recently, as space allows, a few have been transported to Kerr County, but it takes deputies two hours to drive one way.

“When we do find jail space, they cry all the way to Kerrville,” Kinney County Sheriff Brad Coe said. “They say: ‘You’re not supposed to put me in jail. They told me I wouldn’t go to jail.'”

“Now, once we’ve started to find a place to put them, we’re catching 17-year-olds again,” Coe said, highlighting another jail space challenge. In Texas, a 17-year-old is considered an adult with regard to crimes, but the nearby overflow detention facilities will only take those aged 18 years and older.

Smuggling charges—a 3rd-degree felony—are still filed at-large against female drivers, but they get to go home, sans their smuggling vehicle.

Suzanne West, district attorney for Kinney, Val Verde, and Terrell counties, handles felony cases for the region. As of mid-August, she had 3,045 smuggling charges during the fiscal year that ends on Sept. 30. That’s compared to 67 charges in fiscal 2021 and 64 in fiscal 2020.

The charges don’t represent individuals, but rather, if a smuggler is transporting six illegal aliens, the smuggler will receive six charges.

The numbers shot up starting in August 2021, after Texas Gov. Greg Abbott began his Operation Lone Star border security initiative that boosted border regions with state troopers and local prosecution offices with staff from its border prosecution unit. Additionally, in September 2021, Texas enacted a law that made it easier to prosecute smugglers—it’s now unnecessary to prove the driver was getting paid for smuggling.

Although her system doesn’t allow her to obtain exact data for females, West estimates “as many as a fourth of our cases involve female co-defendants,” she told The Epoch Times via email.

She said it was tough to gauge exact numbers “because we spend an inordinate amount of time having to focus on the in-custody arrests—which are all men.”

If a defendant is in jail awaiting trial for a felony, charges must be brought within 90 days to avoid additional bond issues, which means those cases get prioritized, while the at-large cases perpetually drop to the bottom of the list.

“The effect of this will be long reaching in both distance and time, because these at-large defendants will have warrants for arrest at-large and whether they are served and come back to court from their residences all over Texas (and the United States) will depend on the authorities where they live and whether they are arrested,” West said.

Recently, a significant portion of smugglers have been coming from Oklahoma.

“It is not likely that the local law enforcement have the personnel to perform statewide task force-type round-ups,” West said.

“This is already a huge concern, and will get more urgent … over time, especially as we try to dispose of cases rather than just have absconders at large.”

Coe said if anyone is caught smuggling again within 10 days of their first arrest, the penalties become harsher.

During August, deputies in Kinney County arrested 51 smugglers, 13 of whom were female.

During the first eight months of 2022, the county arrested a total of 416 smugglers transporting illegal aliens. The total for all of 2021, which was a record year in itself, was 169 smugglers.

Coe’s numbers don’t include the smuggling loads intercepted in the county by Texas state troopers or Border Patrol.

Drivers are promised anywhere between $500 and $2,000 per alien transported to San Antonio, according to interviews conducted by the sheriff’s office.

Coe’s current jail was built in the 1970s, before the Jail Commission and its standards came into being. The jail barely squeaks by on its inspections and only holds 14 detainees.

The sheriff said he’s reached out to the Texas Department of Emergency Management (TDEM) to get a temporary jail set up, similar to what the agency constructed in neighboring Val Verde County. That jail also doesn’t accept females or juveniles. However, Coe’s next challenge would be staffing a new facility.

“We’ve reached out to see if they can put a temporary facility here. But we haven’t heard anything back,” Coe said.

He intends to bring it up again on a call with the governor’s office this week.

West said if a female smuggler ignores their court summons and an arrest warrant is issued, “then we are back to square one” due to no jail space.

“We either wait until the defendant is picked up for other reasons and our warrant is served, or a task force-type initiative is started to find people.”

She hopes the governor’s office will continue to solve the issues that have arisen during the Operation Lone Star program—mostly related to the sheer volume of illegal aliens crossing the Texas–Mexico border.