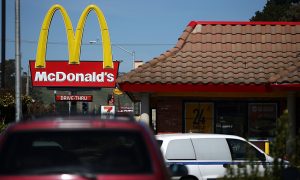 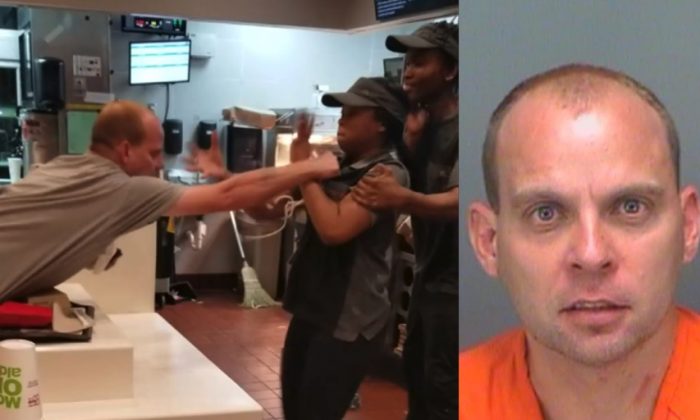 (L) An aggressive McDonald’s customer is engaged in a violent altercation with a female employee in St. Petersburg, Fla. on Dec. 31, 2018. (R) Police booking photo of Daniel Taylor, who faces two counts of battery in connection with the incident. (Brenda Biandudi via Storyful; Pinellas County Sheriff’s Office)
Crime and Incidents

A female McDonald’s employee who threw a volley of punches at a violent homeless man who lunged at her and yanked her shirt has been identified as a former boxer.

Yasmine James was captured on video on New Year’s Eve at the St. Petersburg, Florida, McDonald’s as she fought off a man who grabbed her clothing and nearly pulled her over the counter.

The perpetrator has been identified in local media reports as 40-year-old Daniel Taylor, a homeless man.

“The young girl was heard saying she used to box. After this fight he came back and went behind the counter & tried to fight the manager,” Biandudi wrote on Facebook.

In the viral video, which at the time of reporting has garnered over 3 million views, Taylor grabs James by her shirt collar and nearly drags her across the counter. She resists, and the attacker continues to clutch her shirt, she throws a torrent of punches at his face and head.

People in the background are heard asking for the police as the woman pummels her assailant and demands that he “stops playing with her.”

“Let her go,” a voice can be heard, as one coworker holds onto James, and another walks over to Taylor and breaks up the confrontation. Another employee escorts the visibly upset James out back, while the manager comes over to ask the customer about his order, before peering at the receipt.

The woman returns to the counter and as she looks on the ground for her phone, a battered Taylor screams, “I want her [expletive] fired.”

But the woman yelled back a reply: “No, you’re going to jail!”

Taylor then hurls another insult at the woman, and the clip comes to an end.

Taylor was arrested and charged with two counts of simple battery.

McDonald’s has since released a statement, saying that their first priority is the employees’ and customers’ safety.

Biandudi posted an update to her original post, clarifying that James was not fired.

“The employee was not fired! This really did happen last night for all those asking me … it all started because he wanted a straw!!!”

The perpetrator, however, was arrested and booked into Pinellas County Jail. He also allegedly kicked another employee in the stomach as he was escorted out, ABC30 reported, and now faces two counts of simple battery.

Taylor is being held on a $1,000 bond and was also found to have owed an $11 commissary charge, jail records indicate, according to the Daily Mail.

Taylor was reportedly also ordered to stay away from the victim and the McDonald’s restaurant.

“Our highest priority is always the safety and well-being of our employees and customers at our restaurants.” said a McDonald’s representative, as cited by WPLG. “We have been in contact with the police department and are fully cooperating with their investigation.”

On Facebook, a woman believed to be Taylor’s mother posted on Tuesday that her son had been “homeless for some time” and “hasn’t been able to find a job.”

“My problem is he called me last night about 6:30 pm,” wrote Doraetta Hesse. “He had been beaten and robbed. He told me he was going to call 911.”

The woman said she tried to call and text, but her son did not answer.

“I haven’t heard from him since. I have called 3 area hospitals with no luck,” she said. “They said if they find his body they will let me know.”

A man believed to be the perpetrator’s brother, James Taylor, added a photograph of Daniel Taylor on Hesse’s Facebook post, prompting Donna West to post a screengrab of a news article with the headline, “Aggressive McDonald’s customer has the tables turned on him when he violently grabs a female worker…prompting her to retaliate and overpower him.”

“Yes, he is safe in jail,” West added. “Sorry, your mom was put through unnecessary stress and worry.”

“She’s doing better now that she knows he’s still alive,” replied the man believed to be the detainee’s brother.

All Over a Straw

Biandudi told Fox2News that the altercation started over a straw.

“He was yelling and walking toward the counter and the young lady behind the counter told him that it’s the law now that we’re not allowed to have straws in the lobby,” she told the news outlet.

“They started exchanging words laced with profanity and he said there’s no such law that exists and she was saying yes it is a law,” said Biandudi.

The new law went into effect on Jan. 1 in St. Petersburg and says restaurants can’t put straws out for customers to take at will. People must instead request straws.

Plastic straws will, by 2020, be completely phased out.