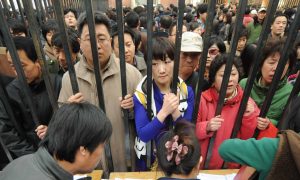 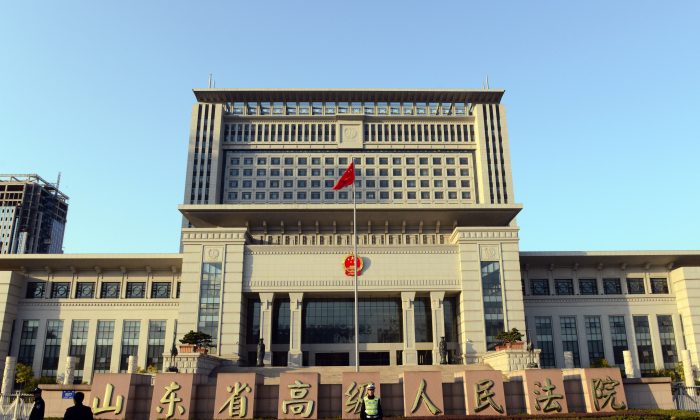 A new proposed legal amendment in China, which could have the effect of criminalizing defense speeches in court, is being seen as a major threat to lawyers. But it hardly seems necessary, given how they are already treated.

This was exemplified in a recent case in north China, when a female lawyer who attempted to participate in the cross-examination of her client was dragged out of the courtroom and “tossed out like a bag onto the street,” according to a witness.

Wang Yu, a well-known rights lawyer, was representing her client, a practitioner of Falun Gong, a persecuted spiritual practice. The court session took place on July 2 in Sanhe, Hebei Province, which surrounds the capital Beijing.

The matter of a cross-examination to take place later in the day was brought up, and Wang Yu expressed her desire to attend it. She was told she could not. When she insisted, she was asked to exit the courtroom. When she declined to do so, she was dragged out by a group of burly bailiffs.

“I have the right to inquire about the evidence and take part in the cross examination… If I don’t participate, I cannot safeguard my client’s rights,” she told Epoch Times in an interview afterwards.

The incident was witnessed by Wang’s colleague, lawyer Feng Yanqiang.

“We heard Wang Yu screaming for help in the corridors,” said Feng. No one in the courtroom could come to her aid because the judge told the bailiffs to prevent anyone else from leaving.

Wang was hauled from the third floor courtroom to the ground floor and left on the street, said Liu Lianhe, a lawyer who saw the incident, and remarked that it looked like she was “tossed out like a bag…”

“It was very violent,” Wang said to Epoch Times. The manhandling left her with a badly injured right arm.

She lodged a complaint against the court with Sanhe’s Procuratorate, accusing it of committing illegal acts. The local prosecuting body said she would get a reply in ten days.

China’s courts often deal ruthlessly with defense attorneys who attempt to defend their clients according to the letter of the law, particularly in cases of human rights abuses and state policies of religious persecution.

Lawyers Wang Yu, Feng Yanqiang, and Hu Guiyun were representing defendants Wang Zhenqing, Wen Jie, Ma Weishan, and Kang Jingtai, four practitioners of the spiritual meditation discipline Falun Gong. Popular through the 1990s, Falun Gong became a target for ruthless suppression on July 20, 1999, under the orders of former Communist Party leader Jiang Zemin. He is reported to have declared that “no measure is too excessive” in suppressing their faith, which consists of five slow moving exercises, and adherence to the tenets of truthfulness, compassion, and tolerance.

Minghui, a Falun Gong website, says it has verified more than 3,800 deaths due to torture. Hundreds of thousands are believed to still be held in labor camps or jails, where they are tortured and abused. Independent researchers estimate that tens of thousands have been killed for their organs, which are sold by hospitals for profit.

Since the late 2000s, several human rights lawyers have stood up to defend Falun Gong practitioners, and many have suffered a fate similar to that of their clients. Gao Zhisheng, a rights lawyer who made his name defending China’s disenfranchised, spent most of the period from 2006 to 2014 in the clutches of secret police after he began taking on Falun Gong cases. The torture he suffered—which included having toothpicks pushed into his genitals—ruined him physically and mentally, and he is still recuperating.

The Chinese legal system prosecutes Falun Gong practitioners with Article 300, a crime custom-built for the purpose: “Using a heretical religion to undermine the implementation of the law.” The basic legal logic of this crime—mp3 players loaded with Falun Gong music are held up as incriminating evidence in court, for instance—are often the focus of lawyers defending Falun Gong practitioners.

But judges do not take kindly to such argumentation. When the judges’ peremptory commands for lawyers to be silent fail, brute force is applied. The unceremonious eviction of Wang Yu in Sanhe People’s Court is the third documented instance of violence against Falun Gong legal representatives this year.

“This trial is just the perfect example,” Wang said.