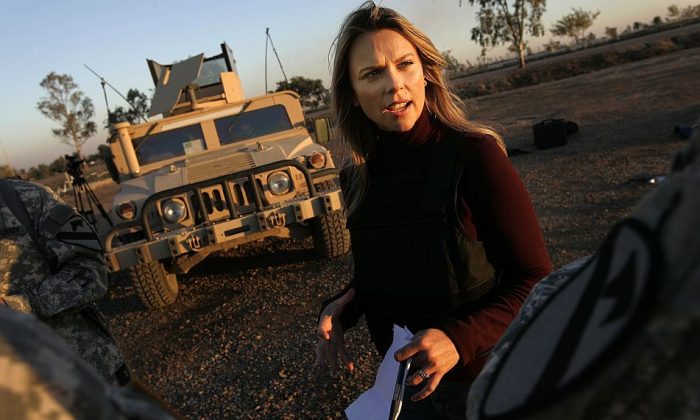 These days, professional women don’t typically discuss their gender in the same breath as their job. The past few decades of progress related to protections for women in the workplace have at least made it possible in some countries to sue for things like harassment or discrimination. For journalists, though, in many ways it’s still the dark ages.

A survey published in 2014 of over 1,000 female journalists around the world found that almost two-thirds of respondents have experienced acts of “intimidation, threats and abuse” while working.

The survey, conducted by the International Women’s Media Foundation and the International News Safety Institute, found that the most frequent problems included threats and intimidation, abuse of power and attempts to damage the media worker’s reputation.

For some, regardless of gender or inherent risks, the important stories of the day simply need to be told.

For one month in 2008, Agnes Taile was among a handful of reporters who covered the conflict in Chad. An armed coalition of non-state groups with weapons had launched an offensive against the government. Government troops were bolstered by extra French forces, and the armed offensive was pushed back to the Sudanese border. Taile stuck it out, largely alone, for 14 arduous days.

“When the war started in 2008, I decided to go on my own,” Taile said during a recent International Women’s Media Foundation forum on the work of women in the media. The panel discussion that included Bloomberg News’ Indira Lakshmanan, freelance photographer Nicole Tung and the BBC’s Karen Peek was a rare glimpse into the special challenges that female journalists face in their work.

Hosted at The Paley Center for Media in New York City and composed of a women-only audience, the half-day forum included a special risk assessment training.

Taile is no stranger to risk. As a television reporter based in Cameroon, she was nearly killed two years before the fighting in Chad. Three men broke into her home and dragged her out at knifepoint. She was beaten, strangled and left for dead.

When the 2008 conflict in Chad began, the trauma of that experience couldn’t keep her from harm’s way.

“I thought to myself, ‘Why am I sitting here waiting for international media to give us the news?’ We were right there, but nobody had the guts to go.”

She set off with three male co-workers, including a cameraman, who all decided to turn back at the border.

“It is your job to get the story,” she said, remembering going in the opposite direction of the people streaming out of Chad toward safety. “If you don’t do it, who’s going to do it? I’m just doing my job. Then to sit back and watch people watching what you have done, that makes me proud.”

She survived Chad, but her work reporting on government corruption and inequality continued to garner her enough unwanted attention that she was forced to flee to the U.S. for her and her family’s safety. Taile is mother to a teenage son.

While negative gender-related experiences can happen both in the newsroom and in the field, for some women, their career as a journalist has been a fairly smooth ride.

Lakshmanan, senior correspondent with Bloomberg News, has covered conflict since 1989 and reported from more than 50 countries. Her first foreign editor was NPR’s legendary Connie Simon, and she said she’s never faced problems with male editors.

She has reported on the fall of the Taliban and the Afghan War, the collapse of the Suharto regime in Indonesia, the East Timor revolution, the end of the Bosnian war and numerous other conflicts.

She seems to have an uncanny knack for blending in wherever she goes, but she admits she sometimes buries her nose in a notebook. Overall her approach seems to have served her well. While working in Afghanistan, she refused to wear a burqa because doesn’t believe in it. But she did wear regionally appropriate clothing of a salwar kameez.

Beyond that, Lakshmanan said she relies on her wits and common sense to stay safe, particularly in large crowds.

“Situations can change like that,” she said, snapping her fingers. Once in Indonesia she was having a “perfectly fine time” doing an interview, and it turned into a mob scene without warning.

Lakshmanan’s advice, even when there’s no mob to contend with, is to “know when to get out when the getting is good” and call it a day.

“Maybe you don’t need that last interview,” she said, recalling a time in Afghanistan when she wanted to talk with one more person before heading out for the day. That conversation ended up turning into a seven-hour drama. “Some of us are so obsessive.”

In some cases, being a woman has protected her when she’s encountered jumpy men with guns. During one encounter with Afghan militia, Lakshmanan and her male fixer were not allowed to continue on their way. The militia demanded they produce passes, and then attacked her fixer. She escaped their wrath, she believes, simply because of her gender.

“Being a woman in that case, oddly, was protection,” she said. “The person they picked on in that case was the local journalist.”

Others in the panel agreed with Lakshmanan that being a woman can often be an advantage, allowing for access to areas where only women are allowed, particularly in patriarchal societies. They describe it as “back-of-the-house kitchen access.”

When it comes to kidnappings in Muslim countries, Peek said gender can be the determining factor as to whether you’re taken.

“In most cases, women won’t typically be targets for kidnapping in these areas,” said Peek, deputy head of the BBC’s high-risk team. The team oversees all security-related details when staff go to high-risk areas or go on high-risk assignments. “There are just certain things they won’t want to deal with related to women.”

There are times when sexual assault and other types of physical violence are very real dangers, though. Peek recommends some type of self-defense training that would at least provide an opportunity to stun an attacker and get away. She, and others on the panel, do not recommend that a journalist carry a gun, though.

She also warns against one-off trainings that give only brief options for self-defense, which might serve to further aggravate an attacker if done incorrectly.

Tung, who has reported in Turkey, Syria, Libya and Egypt, is taking the training route. Tung said she recently started taking a self-defense course that is “aggressive and involves carrying small blades.”

“If I’m about to be raped, I’m more than willing to hurt this person,” she said.

She’s also picked up some pointers from fellow female journalists during her time in places like Cairo, where stories of various types of attacks on women are widespread and long-running. Tahrir Square is particularly notorious, and Tung refuses to even set foot there because of the “roaming packs of men” looking for women to attack.

The most well-known case of such an attack in Tahrir Square was on CBS News correspondent Lara Logan in February 2011 as the Hosni Mubarak regime was falling and the square was full of revelers. While reporting from the square, the mob turned ugly and Logan was separated from her crew. She was attacked by men from every direction.

“… before I even know what’s happening, I feel hands grabbing my breasts, grabbing my crotch, grabbing me from behind,” Logan said in an interview with CBS colleague Scott Pelley months later. She said the one person who managed to stay anywhere near her was a security person who couldn’t fight off the mob by himself.

Logan survived the horrifying ordeal, but in the more than three years since her interview about the attack, open conversations like the one at the Paley Center about violence against women remain extraordinarily rare.

Tung, who recommends tactics such as wearing a one-piece bathing suit under clothing and pants with a belt fastened inside out for a degree of protection, believes that silence needs to be broken.
“If something happens to us in the field, we need to talk about it,” she said.