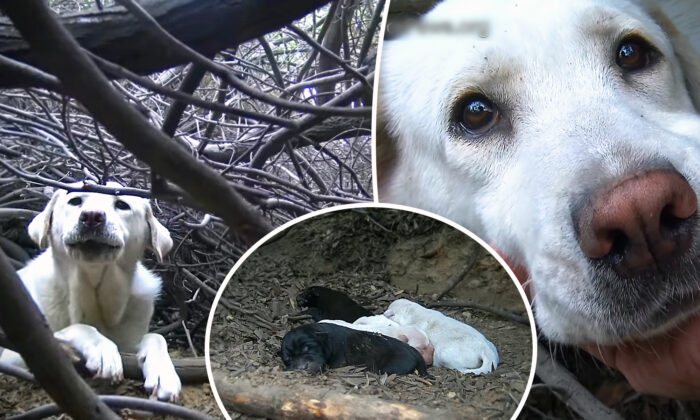 When California-based animal rescue organization Hope For Paws got a call about a trio of homeless dogs, they went off in search of two male dogs and one very pregnant female Labrador.

When Hope for Paws founder Eldad Hagar spotted the dogs, though, he immediately noticed that the Labrador female was no longer pregnant—and realized that his rescue operation was going to be about more than just rescuing the adult dogs and finding them homes.

Thanks to some delicious snacks, Hagar and volunteers JoAnn Wiltz and Katie McKittrick were able to gain the trust of the three dogs and safely get Hagar himself over the fence separating the dogs from the sidewalk. But while he didn’t think the dogs would attack him, he realized quickly that he hadn’t gained the new Labrador mom’s trust nearly enough to convince her to lead him to her newborn pups—which meant that he had to use some pretty ingenious tricks to convince her to let him rescue her adorable new bundles of love, too.

He started by playing a video of crying puppies on his phone, hoping that the sound would spur the mom to lead him to her own litter.

She quickly led him farther into the enclosed lot towards some heavy vegetation, and Hagar and the other two volunteers hoped this meant that the puppies would be easy enough to find. Unfortunately, the mom was all too willing to use a common deception trick to her advantage; she guarded a fake location to make Hagar think her puppies were there, while in reality they were still hidden away somewhere else entirely!

Hagar knew that the abandoned area where the three adult dogs had been spotted was just above the busy, rushing 105 speedway, which made for an incredibly unsafe location for the mom and her new pups. So they acted quickly; after asking for long-time Hope For Paws volunteer Loreta Frankonyte to bring additional supplies, they eventually wandered and sought out the mom by approaching from the busy highway side of the brush.

From there, it was just a matter of regaining her trust with food. Using some trusty cheeseburgers, they fed Mom and convinced her to part with her pups just long enough to pick all of them out from under the dense brush and bring them back to the Hope For Paws rescue vehicle for transport to a veterinary clinic.

Now, the mom has been named Amazon, and she’s been given a second chance to have a happy life—hopefully with her pups. The Socal Labrador Retriever Rescue offered to foster Amazon and her litter, who were named Hudson, Nile, Trinity, Lena, Seine, Tigris, and Yukon. Thanks to the fact that they were brought to a loving foster and were given the opportunity to stay together, they were able to grow and develop as a happy, well-adjusted unit of adorable young puppies—and it didn’t take long for the entire group of them to end up getting adopted.

Hope For Paws is always looking for more people to help out, whether with contributions or even suggestions of dogs that might need their assistance. For now, though, they can feel proud that this sweet mom and her babies were able to make it out of a dangerous situation and into some loving forever homes.