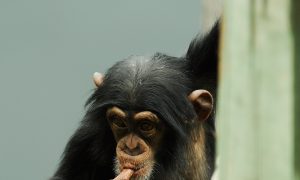 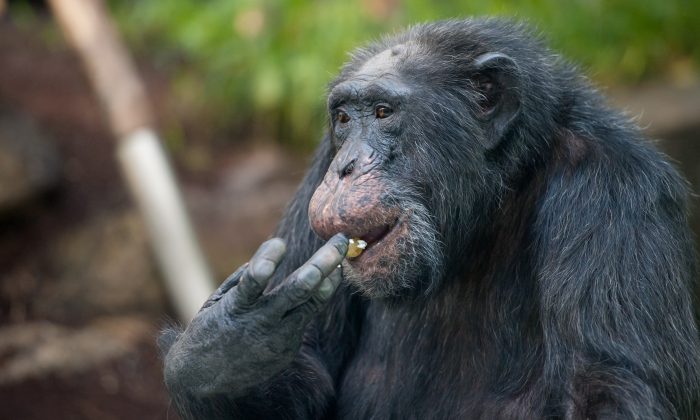 Chimpaneze in Fongoli, Senegal, are the only known non-humans to consistently hunt with tools, and the females do so more than their male counterparts. (SVEN HOPPE/AFP/Getty Images)
Science

In 2007, Jill Pruetz first reported savanna chimps at her research site in Fongoli, Senegal, were using tools to hunt prey. That was big news, but what also stood out to Pruetz was that female chimps were the ones predominantly hunting with tools.

The finding attracted criticism because of the small sample size, but the anthropology professor was motivated to learn more.

Since then, Pruetz and her research team have documented more than 300 tool-assisted hunts. Their results, published in the journal Royal Society Open Science, support the initial findings—female chimps hunt with tools more than males do.

“It’s just another example of diversity in chimp behavior that we keep finding the longer we study wild chimps,” Pruetz said. “It is more the exception than the rule that you’ll find some sort of different behavior, even though we’ve studied chimps extensively.”

Both male and female chimps primarily pursued galagos, or bush babies, in tool-assisted hunts. Pruetz said the chimps used a spear-like tool to jab at the animal hiding in tree cavities. She added that one explanation for the sex difference in tool use is that male chimps tended to be more opportunistic.

“What would often happen is the male would be in the vicinity of another chimp hunting with a tool, often a female, and the bush baby was able to escape the female and the male grabbed the bush baby as it fled,” Pruetz said.

The savanna chimps at Fongoli are the only nonhuman population to consistently hunt prey with tools. Why is that the case? Pruetz, professor of liberal arts & sciences at Iowa State University, said a better question may be why are chimps at other sites not using this technique?

It may be that they never learned the technique, she said. Tool hunting also may be a result of social tolerance that doesn’t exist at other chimp sites.

“At Fongoli, when a female or low-ranking male captures something, they’re allowed to keep it and eat it. At other sites, the alpha male or other dominant male will come along and take the prey. So there’s little benefit of hunting for females, if another chimp is just going to take their prey item.”

The environment is another factor. Pruetz said there are no red colobus monkeys, the preferred prey of chimps at other sites, because of the dry conditions at Fongoli. The bush babies are more a prevalent prey that female chimps can access using tools.

Why It’s Not ‘Gathering’

Pruetz is often asked why the female’s use of tools is considered hunting rather than gathering. It’s a question that reflects stereotypes associated with female chimp behavior. The similarities to termite- or ant-fishing, which is sometimes used as a comparison for tool-assisted hunting, are superficial, she said. The behavior of the prey and effort required by the hunter is different.

“Fishing for termites is a very different activity than jabbing for a bush baby,” Pruetz said. “With fishing, termites grab on to a twig and don’t let go and the chimp eats the termites off the twig. When hunting, the bush baby tries to bite, escape, or hide from the chimp. The chimps are really averse to being bitten by a bush baby.”

While a bush baby is smaller than and not as fierce as a monkey, Pruetz said it is really no different than humans hunting doves instead of deer. Ultimately, the tool-assisted hunting allows female chimps, which may be less likely to run down prey, access to a nutritional food source, Pruetz said.

Researchers from Cambridge University, Iowa State University, and the Max Planck Institute for Evolutionary Anthropology also contributed to the study.