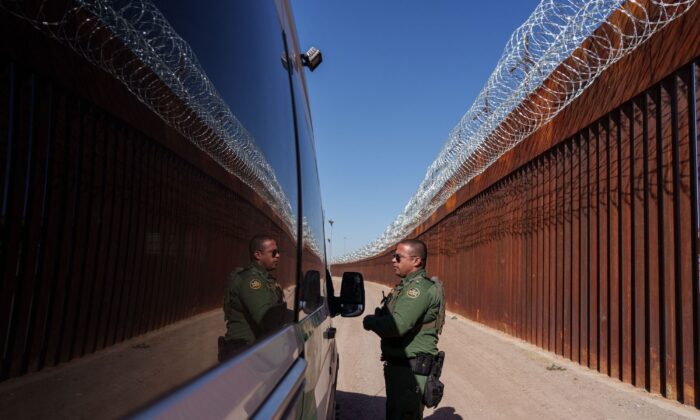 U.S. Border Patrol agent Carlos Rivera is reflected in the window of a vehicle as he speaks to another agent along the border wall in downtown El Paso, Texas, on June 3, 2022. (Paul Ratje/AFP via Getty Images)
Immigration & Border Security

The Biden administration will reimburse El Paso city, which is following the lead of other border cities in Texas and Arizona to transport illegal immigrants to New York on buses, according to a city official.

The Federal Emergency Management Agency (FEMA) has said it will reimburse local governments and NGOs for the cost of aiding and transporting the illegal aliens, according to Mario D’Agostino, the deputy city manager of El Paso.

“OEM has sponsored and provided transportation services for migrants out of El Paso, which is reimbursable through FEMA,” D’Agostino said in a statement obtained by El Paso Matters, referring to the city’s Office of Emergency Management.

“OEM has sponsored charter buses to include a recent transport to New York City, this was the preferred destination for those without any means to travel.”

FEMA did not immediately respond to a request for comment.

D’Agostino said that the last time El Paso officials arranged a charter bus to transport illegal immigrants elsewhere was on June 21, when 50 individuals were sent to Dallas to be aided by a group of area faith leaders, El Paso Matters reported.

The mayors of New York City and Washington, Eric Adams and Muriel Bowser, both Democrats, have criticized the busing program as politically motivated.

However, Gov. Greg Abbott (R-Texas) has said that individuals apprehended along the U.S. southern border voluntarily chose to go to their cities.

Around 4.9 million people have illegally entered the United States from Mexico since President Joe Biden took office in January 2021, according to a report released by the Federation for American Immigration Reform on Aug. 16.

Abbott has previously said that Biden’s “open border policies” and “refusal to acknowledge the crisis” they are causing forced him to take “unprecedented action,” which includes sending illegal immigrants to New York City and Washington.

“In addition to Washington, D.C., New York City is the ideal destination for these migrants, who can receive the abundance of city services and housing that Mayor Eric Adams has boasted about within the sanctuary city,” Abbott said earlier in August.

The Pentagon has denied requests from both Adams and Bowser for federal support, including National Guard deployments, to help their cities cope with the influx of illegal immigrants.

“Operation Lone Star continues to fill the dangerous gaps left by the Biden Administration’s refusal to secure the border,” Abbott’s office said in a statement.

In addition to the constant stream of illegal immigrants, U.S. authorities along the border with Mexico have stopped the “smuggling of drugs, weapons, and people” into the United States, as well as “transnational criminal behavior between ports of entry,” according to the statement. This includes over 335.5 million “lethal fentanyl doses,” Abbott said on Twitter.