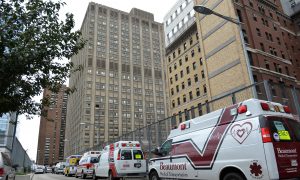 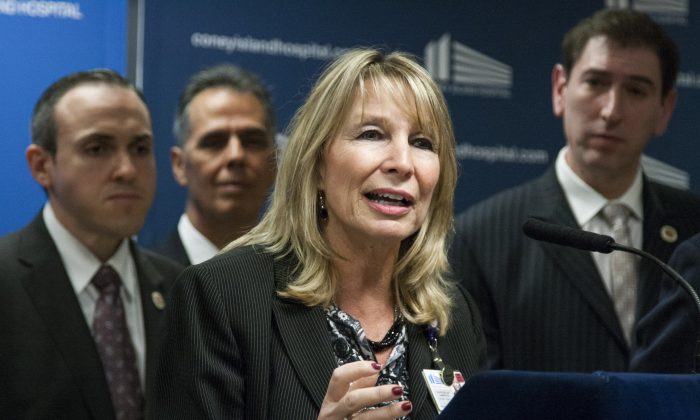 She immediately rushed to the seventh floor intensive care unit, to check on the hospital’s sickest patients. At first nothing happened.

Then, as water poured into the basement and lobby, emergency nurses with their uniforms soaked through brought their patients into the seventh floor on stretchers, spilling into the hallways when the rooms were full. Then, the lights went out.

“That, that was scary. Imagine being in the hospital where you have a lot of patients on machines, getting IV fluids, and it’s pitch black,” recalled Mancher, “When we looked outside, there was no light. No street lights, no car lights. Pitch black.”

The power lines were cut, so Mancher and her nurses were unable to communicate with the engineering department when a fire broke outside and they smelled the smoke. Patients asked what was going on, but the nurses didn’t know either.

“It was really a horrific night,” said Mancher, who has been a Coney Island nurse for 35 years.

The flooding and short-circuiting forced Coney Island Hospital to close in Oct. 2012, and it was only in January that they could re-open.

In light of the severe damages Sandy wreaked on four major public hospitals, the federal government has given them $142 million in the past for partial repairs and temporary flood barriers.

This time the funding will not only go toward repairs but toward preventing major damage from future floods.

The award is the second largest Federal Emergency Management Agency (FEMA) has ever given, after funding for repairs following Hurricane Katrina.

As the hardest hit public hospital, Coney Island Hospital has been allocated $923 million, while $376 million has gone toward Bellevue Hospital Center in Manhattan. Metropolitan Hospital Center and Coler Specialty Hospital on Roosevelt Island have garnered $120 and $181 million, respectively.

The money will fund various upgrades, including better equipment, flood barriers, and a new Emergency Department for Coney Island.

Key equipment in Coney Island Hospital will be moved to the second floor to protect them in the event of another flood.

Previous FEMA funds were only enough to repair Sandy-related damages, said Sen. Charles Schumer, who advocated for the money in Congress. The new grant announced Thursday asked for more.

“Vast amounts of medical equipment will make light years difference,” said Schumer. “We were caught off guard after Sandy, because we never had such a flood before. But we will take what we learned from that experience and build back better and stronger.”

Another difference in the grant this time, is that Schumer asked for all the money upfront. He said this strategy allowed the hospitals to get as much money as possible while people still cared about Sandy.

Mancher called the money, “the best gift you can give me.”

Both the mayor and senator noted that the staff of the hospital didn’t lose a single patient through Sandy.

And although it was the worst night, far tougher than the other snowstorms the hospital staff have braved, Mancher also said it was her proudest night.

She explained that “the nurse were freaking out themselves. They had no clue what was going on with their families.”

But even so, one nurse went over to hold the hand of a patient who was on a ventilator and said, “Don’t worry about it. We know what we’re doing; we can take charge here. Everything’s going to be okay.”