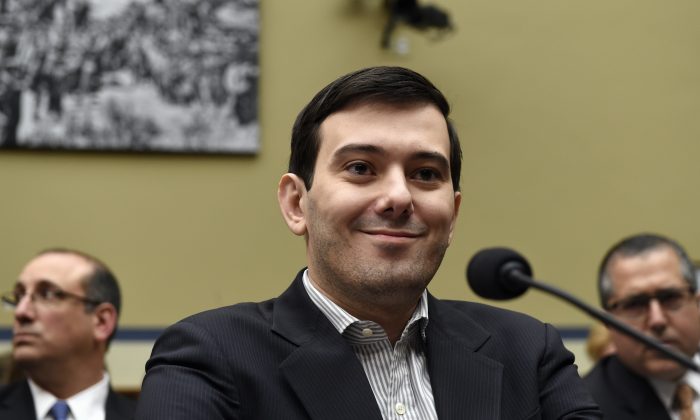 Pharmaceutical chief Martin Shkreli listens on Capitol Hill in Washington, D.C., on Feb. 4, 2016, during the House Committee on Oversight and Reform Committee hearing on his former company's decision to raise the price of a lifesaving medicine. Shkreli refused to testify before U.S. lawmakers who excoriated him over severe hikes for a drug sold by a company that he acquired. (AP Photo/Susan Walsh)
News

NEW YORK—Several witnesses in a securities fraud case against pharmaceutical executive Martin Shkreli are concerned he will retaliate if they testify against him, U.S. prosecutors say in a court filing.

Federal prosecutors in New York are asking a judge delay a civil lawsuit that the U.S. Securities and Exchange Commission brought against Shkreli until after his criminal case plays out. They fear that if Shkreli is allowed to take depositions in the civil case, he will have access to information that isn’t normally disclosed until the late stages of a criminal case.

Here, there is evidence that defendant Shkreli has taken steps to intimidate or threaten individuals in the past.
— Prosecutors

“Here, there is evidence that defendant Shkreli has taken steps to intimidate or threaten individuals in the past,” prosecutors wrote in filings Thursday.

Shkreli’s attorney, Benjamin Brafman, said the allegations against his client are “preposterous.”

While his ‘keen intellect’ can at times be intimidating to mere mortals, nothing else about Martin Shkreli is intimidating at all.
— Benjamin Brafman, Shkreli's attorney

“While his ‘keen intellect’ can at times be intimidating to mere mortals, nothing else about Martin Shkreli is intimidating at all,” he said.

Shkreli, 32, gained notoriety last year after a drug company he founded, Turing Pharmaceuticals, spent $55 million for the U.S. rights to sell a life-saving medicine called Daraprim and promptly raised the price from $13.50 to $750 per pill.

The former hedge fund manager was arrested in December after prosecutors said he lost investors’ money through bad trades and then looted Retrophin, another pharmaceutical company where he was CEO, for $11 million to pay back his disgruntled clients. Shkreli has pleaded not guilty to securities fraud and conspiracy charges.