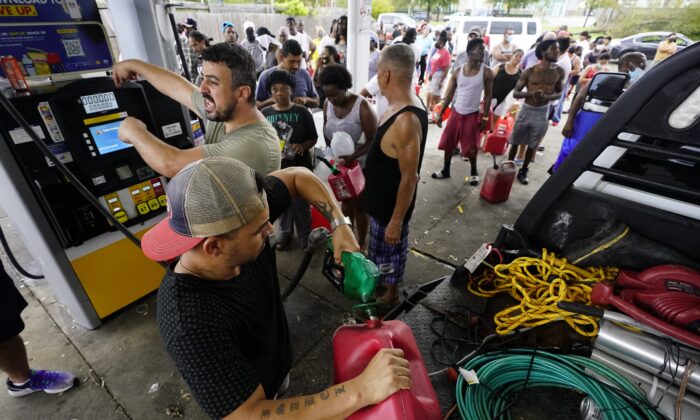 The U.S. Department of Energy announced Thursday it will utilize the nation’s Strategic Petroleum Reserve to address fuel shortages in Louisiana because of Hurricane Ida.

Transportation also is precarious given limited gas station fuel supplies and pumps rendered useless from a lack of electricity. According to the popular app GasBuddy, more than 65 percent of Baton Rouge and New Orleans gas stations were without fuel as of Thursday morning, while more than 35 percent of Louisiana was without fuel.

The exchange program allows oil refiners to borrow SPR crude during declared emergencies and requires full repayment with interest at a later date.

“The exchange involves a release of 1,500,000 barrels of crude oil to ExxonMobil,” the statement said.

“The people of Louisiana are literally in the dark without electricity, or they are relying on scarce fuel supplies to power backup generators,” he wrote, while also citing inoperable cellular networks, severed internet connections and disabled water and sewer systems.

“I strongly urge you to consider authorizing the release of crude oil from the Strategic Petroleum Reserve and to temporarily provide refiners relief from the Renewable Identification Number required by the Renewable Fuel Standard,” Graves wrote.

Other factors contributing to fuel shortages will require more time, such as fixing downed transmission lines across the Mississippi River that are currently blocking maritime access in certain areas, and fuel supply disruptions from upstream production facilities.

“This is a great step forward in helping to address the closure of the Mississippi River, pipelines shutdown and power outages that are preventing the availability [of] gasoline to run [life]-saving generators and vehicles,” Graves said in a statement after DOE’s Thursday afternoon announcement. “The next step to this is getting generator or grid power to our refineries.”