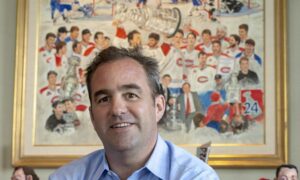 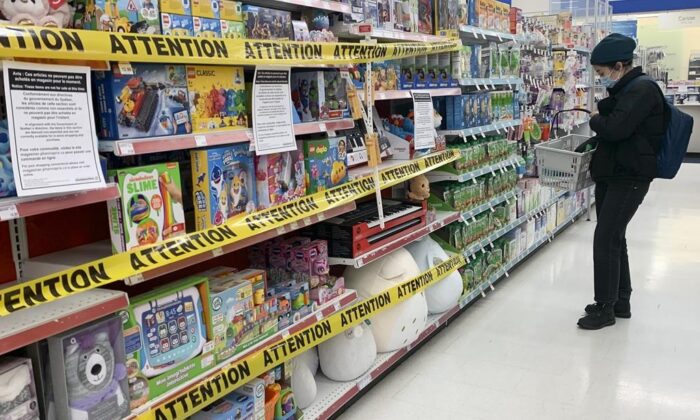 Tape is shown on shelves preventing the sale of non-essential products at a pharmacy in Montreal on Jan. 3, 2021. (The Canadian Press/Graham Hughes)
Canada

OTTAWA—The federal Liberal government is weighing whether to bar people who have travelled overseas from a new sick−leave benefit that pays up to $1,000 to Canadians who have to quarantine due to COVID−19.

The Canada Recovery Sickness Benefit was launched in the fall to help Canadians who are unable to work because they must quarantine during the pandemic. It pays $500 per week to a maximum of two weeks.

But Employment Minister Carla Qualtrough says the government is “actively looking at all options” in the face of questions over whether Canadians who have travelled abroad should be allowed to collect the money.

The benefit is designed “to provide workers with a paid sick−leave option where one might not be available through their employer, so that workers did not have to choose between going to work and putting food on the table,” she said in a statement.

“The Canada Recovery Sickness Benefit was never intended to incentivize or encourage Canadians to not follow public health or international travel guidelines. … We are actively looking at all available options to address this issue.”

Questions about the sick−leave benefit were first raised over the weekend by Bloc Quebecois Leader Yves−Francois Blanchet, who said it was “absurd in most cases” that anyone able to leave the country would need government support to quarantine.

“If someone is travelling because it is essential for their work, you might think they won’t lose income,” he added in a statement in French. “And if someone is traveling for pleasure, they are already being advised not to travel.”

NDP Leader Jagmeet Singh, whose party pushed the Liberals to create the benefit, welcomed the government’s review, saying Canadians were “rightly upset those who can afford to go on a vacation could get $1,000 to stay home when they come back.”

Yet he also warned Canadians would continue to leave the country as long as non−essential travel was allowed.

“We need to make sure they have all the tools to stay home when they come back,” he said. “We look forward to (the government) coming back to parliamentarians with a solution that doesn’t create a bigger health risk.”

The emerging debate over what to do with the sick−leave benefits comes as Canadians have been buffeted over the past week with revelations that some politicians have ignored their own government’s advice and engaged in non−essential travel abroad.

Those include Rod Phillips, who resigned as Ontario’s finance minister after a holiday trip to the Caribbean exploded in controversy, as well as a number of Alberta MLAs who Premier Jason Kenney has declined to punish.

The federal NDP also stripped Manitoba MP Niki Ashton of her duties as the party’s transport critic and deputy critic for women and gender equality after she travelled to Greece this month. Ashton says she left to be with her ailing grandmother.

Those trips have come even as millions of Canadians face government−imposed lockdowns across the country aimed at curbing the second wave of COVID−19 infections, which included thousands of newly reported cases on Sunday.

That includes nearly 3,000 new positive tests in Ontario over the past 24 hours and more than 7,600 new cases in Quebec since Thursday, with hundreds of people hospitalized in both provinces.

In a rare bit of good news, however, Nunavut reported that the territory has no known cases as all 265 residents who have previously tested positive are now recovered. The territory has logged one virus−related death over the course of the pandemic.