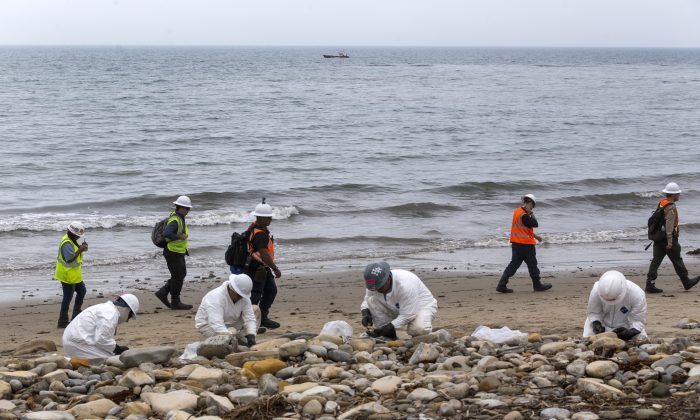 FILE - In this June 10, 2015 file photo, shoreline Cleanup Assessment Technique team members evaluate oil coverage as workers clean up areas affected by an oil spill at Refugio State Beach, north of Goleta, Calif. The U.S. Department of Transportation wants to expand rules for pipelines carrying oil, gasoline and other hazardous liquids inspections requirements to include rural areas that are currently exempt, and for companies to more closely analyze the results of their inspections. (AP Photo/Damian Dovarganes, File)
US

Feds Want Tougher Rules for Pipelines After Series of Spills

BILLINGS, Mont.—U.S. officials said Thursday, Oct. 1, they want tighter safety rules for pipelines carrying crude oil, gasoline, and other hazardous liquids after a series of ruptures that included the costliest onshore oil spill in the nation’s history in Michigan.

The U.S. Department of Transportation proposed expanding pipeline inspection requirements to include rural areas that are currently exempt and for companies to more closely analyze the results of their inspections.

The agency also would make companies re-check lines following floods and hurricanes, and submit information about leaks and other problems on thousands of miles of smaller lines that fall outside of existing regulations.

This is a big step forward in terms of strengthening our regulations. It’s timely, and it’s raising the bar on safety.
— Marie Therese Dominguez, chief, Transportation Department's Pipeline and Hazardous Materials Safety Administration

The Associated Press obtained details of the proposal in advance of Thursday’s formal announcement. It covers more than 200,000 miles of hazardous liquids pipelines that crisscross the nation—a network that expanded rapidly over the past decade as domestic oil production increased.

Other pipeline ruptures in recent years have fouled waterways in Montana, California, Virginia, and elsewhere with crude oil and other petroleum products.

“This is a big step forward in terms of strengthening our regulations,” said Marie Therese Dominguez, chief of the Transportation Department’s Pipeline and Hazardous Materials Safety Administration. “It’s timely, and it’s raising the bar on safety.”

The new rules have been in the works since 2010, when 840,000 gallons of crude oil spilled into the Kalamazoo River in Michigan and other waterways from a ruptured line operated by Enbridge Inc. of Calgary, Canada.

Investigators with the National Transportation Safety Board cited corrosion and a crack in the line as the probable cause, and blamed the accident in part on ineffective oversight and “weak regulation” from the pipeline safety administration.

The leak went undetected for 17 hours, and cleanup costs for the spill exceeded $1 billion, making it the costliest onshore oil spill ever in the United States, NTSB Chairman Christopher Hart said this week in testimony before the U.S. Senate Commerce, Science, and Transportation Committee.

If the proposed changes had been in place, the requirements could have prevented the Michigan spill and 237 other accidents between 2010 and 2014, transportation officials said. The accidents released a total of more than 10 million gallons of oil, gasoline, and other products and resulted in $118 million in costs and damages.

The proposed rules also expand requirements for leak detection systems to include all new, regulated pipelines. Current rules cover only those lines in areas with a large population or environmentally sensitive features such as drinking water supplies.

John Stoody, vice president of the Association of Oil Pipe Lines, an industry group, said much of the proposal involves work that companies already do voluntarily, such as periodic inspections of lines in rural areas.

By imposing requirements on the timing of maintenance, federal officials run the risk of diverting attention from high-consequence areas that have large populations or environmental features, he said.

“That’s maintenance dollars that would not be spent on higher-priority areas,” Stoody said.

Despite its broad sweep, the federal proposal was characterized as an incremental step forward by the head of the Pipeline Safety Trust, a Bellingham, Washington-based advocacy group.

“There’s some good stuff in there,” trust executive director Carl Weimer said. “But we’re disappointed that it took five years, and we don’t think it’s as significant as (federal officials) tried to portray it.”

Weimer pointed to the requirement to check lines after flooding. The lack of such checks was blamed in a 2011 Exxon Mobil pipeline rupture that spilled 63,000 gallons of crude oil into Montana’s Yellowstone River. It’s a good idea to inspect such lines, he said, but companies also should take steps ahead of time to guard against such natural disasters.

Rep. Lois Capps said she remained ‘frustrated by how long it has taken … to roll out these basic safety improvements.’

The proposal was welcomed but criticized as long overdue by Rep. Lois Capps (D-Calif.), whose district includes the Santa Barbara County coastline where a May rupture of a corroded oil pipeline spilled 101,000 gallons of crude, some of which flowed into the ocean, and formed a large slick and stained beaches.

Capps said in a statement that she remained “frustrated by how long it has taken … to roll out these basic safety improvements.”

The changes could cost pipeline companies a combined $22.5 million annually, according to the agency.

The 2011 Pipeline Safety Act passed by Congress included requirements for the use of remote-controlled and emergency valves that can quickly shut down the flow of oil. Advocates say such valves are a simple way to limit damage from accidents.