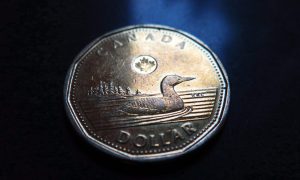 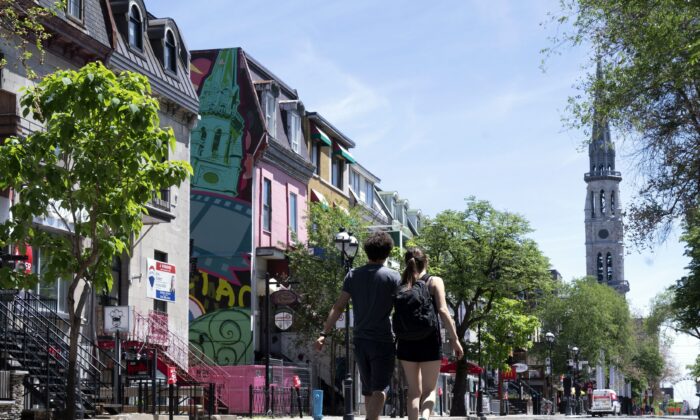 A couple stroll down a near-empty St-Denis Street in Montreal, closed to traffic in efforts to attract patrons, on June 8, 2020. Economists are advising fiscal discipline and spending reforms as Canada’s deficit soars. (The Canadian Press/Paul Chiasson)
Canada

Shortly after the throne speech on Sept. 23, Fitch Ratings said new spending pledges announced by the government will propel the debt and deficit beyond the credit rating agency’s estimates in June, when Canada was downgraded to AA+ from AAA due to “deterioration of Canada’s public finances” because of the pandemic.

Fitch said in a Sept. 25 note that general government debt-to-GDP ratio is “already significantly higher” than the median of its AA-rated peers.

Livio Di Matteo, a professor of economics at Lakehead University, says that while the pandemic required a response that was bound to strain government finances, at this stage “more thought needs to be devoted to spending money wisely.”

“Continually intoning in sombre tones that ‘people need to be helped’ as a pretext for scattergun spending that raises deficits and debt may be politically popular now, but it helps no one in the long run,” Di Matteo said in an interview.

“Canada is fortunate that it was able to deal with the first wave of the pandemic from a very good fiscal position, and a $400 billion deficit, while eyebrow-raising, is nonetheless manageable.”

However, he adds that even with the current low interest rates, “running a $400 billion dollar deficit every six months for the next two years would be fiscally irresponsible.”

Deficit projections increased from $28 billion in December to $343 billion this year.

In a study titled “Explaining the Growth in Federal Program Spending Since 2015,” economists at the Fraser Institute concluded that 2020 has seen the highest level of spending per person in Canadian history, reaching $9,306 per person, which they say is 6 percent more than it was at peak spending during the Great Recession in 2009.

To help combat a second wave of COVID-19, on Oct. 2 the government announced more spending to help small and medium-sized businesses, giving an additional $600 million to augment the $962 million already invested in the Regional Relief and Recovery Fund. About $456 million of the new money will go to help businesses survive lockdowns, and the remaining $144 million will help provide technological and capital support to those in rural areas.

On Sept. 29, the government also announced an increase in foreign aid, pledging an extra $400 billion in humanitarian and development spending that would help other countries access vaccines and make their bilateral debt payments.

Jake Fuss, an economist and policy analyst at the Fraser Institute, says that to curb spending the government should look to the innovative approach of the Chretien government of the 1990s, which managed to reduce spending by 9.7 percent over two years through fiscal reforms.

“Prime Minister Jean Chretien and Finance Minister Paul Martin made several changes, including decreasing direct spending in specific departments and reducing federal transfers to the provinces, while removing most of the strings attached to allow provinces more flexibility and autonomy over social assistance,” Fuss said in an interview.

Fuss says another area to consider for spending reform is compensation for public workers.

“Canada’s government sector workers—federal, provincial, and local—enjoyed a 9.4 percent wage premium, on average, over their private sector counterparts in 2018, the latest year of available data,” he says. “By bringing government compensation more in line with the private sector, the Trudeau government could begin controlling its spending.”

Di Matteo notes that those suffering from the economic impact of the pandemic are probably seeing the first severe downturn since the 1980s and early 1990s, and although support programs are still needed for individuals and businesses over the next six months, “they cannot be as generous as they were previously.”

“Part of the problem is that there has not been a real recession in Canada since the early 1990s—2008–09 was actually mild—and new cohorts coming into the labour market have never seen a prolonged or severe downturn such as the 1981–82 or the 1990–91 recessions,” he says.

“Indeed, prior to the 1990s, most people expected a recession every five to seven years, and the government support programs of the day were nowhere near as generous as what the public has gotten used to over the last six months. Even then, as generous as these programs are, they have done little for the people currently on social assistance or in need of social housing.”