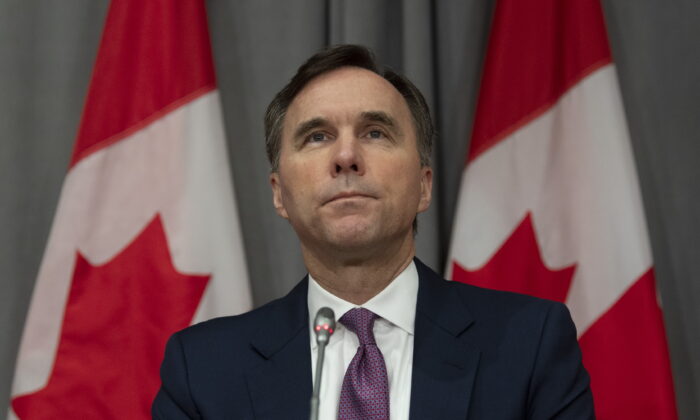 Minister of Finance Bill Morneau listens to a question during a news conference Friday May 1, 2020 in Ottawa. (Adrian Wyld/THE CANADIAN PRESS)
Canada

OTTAWA—Large companies that receive bridge financing through a new federal loan program will have to give the government the option to take an ownership stake, or provide a cash equivalent.

Finance Minister Bill Morneau says the terms will be the same for any company asking for help through the program that opens for applications today.

He says the terms are designed to make sure companies using the program receive bridge loans, not bailouts, to get through COVID−19’s economic disruptions.

Publicly traded companies, or any their private subsidiaries, will have to issue warrants giving the government the option of purchasing shares worth 15 percent of the loan, or receiving the equivalent in cash. Privately held companies will pay the same in fees, Morneau says.

“The idea behind the warrant is to make sure that if the firm does well that Canadians, and Canadian taxpayers, share in that upside,” he says.

“The Canadian government will not be required to take that value in shares, it can take it in cash.”

The Liberals have said the loans would be on commercial terms, and require companies to have already gone to banks or the market and been unable to meet their financial needs.

Recipients would also have to agree to limits on executive compensation, dividend payments and share buy−backs, as well as show they are contributing to the Liberals’ goal of reducing greenhouse−gas emissions.

Loans would start at $60 million with no upper limit, Morneau says, and be targeted at firms with earnings of at least $300 million.

Morneau says the loan program for Canada’s largest corporations is so they can stay open and keep employees on their payrolls and to avoid bankruptcies of otherwise viable firms, wherever possible.

Interest will be set at five percent in the first year, rising to eight percent in the second year, and two percent annually thereafter. The terms of the program posted online say companies can pay off the interest on the loan through in−kind contributions, usually goods or services, for the first two years of the loan.

“What we’ve done here is make sure we’re providing a low level of interest in the first year, but one that’s appropriate so that employers that seek this will first go to their own sources of financing,” Morneau said during a morning news conference in Toronto.