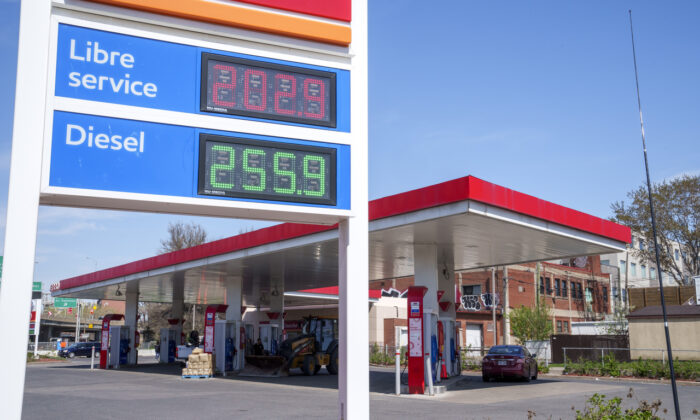 The price of regular gasoline and diesel fuel is displayed at a gas station in Montreal on May 11, 2022. (The Canadian Press/Paul Chiasson)
Canada

The federal government is delaying the release of new greenhouse gas emissions (GHG) standards until late 2023, but the new regulations are expected to push the oil and gas sector to make bigger emissions cuts by 2030.

Last week, the federal cabinet approved the final regulations of the Clean Fuel Standard (CFS) introduced in 2016 as part of the Liberal government’s climate change plan. The regulations were obtained by The Canadian Press on June 28 after being leaked ahead of their intended July 6 publication date.

The draft regulations were initially expected in the spring of 2020 but weren’t published until December 2021, followed by a mandatory six-month comment period.

With the baseline number set using the 2016 average carbon intensity—the measure of GHG emissions from transportation fuel—the draft regulations aimed to have gasoline drop 2.5 percent in carbon intensity in December 2022. The final plan, however, adjusts that baseline and requires a drop of 3.6 percent for gasoline, and 3.8 percent for diesel by December 2023.

Emissions intensity is calculated on what is known as life cycle emissions, which includes every ounce of carbon dioxide, methane, or other GHG produced when oil and gas are extracted, processed, refined, upgraded, transported, and burned.

“The CFS will be a key tool that complements pollution pricing and the pending oil and gas sector emission cap, to cut emissions and drive the use of clean fuels and technology in Canada,” Environment Minister Steven Guilbeault’s office told The Canadian Press in a June 27 statement.

In June 2020, the federal government said it would scale back the standard in the early years of its implementation, as oil and gas companies suffered revenue declines during the COVID-19 pandemic. Many Canadian oil and gas companies are now reporting massive profits in the first quarter of 2022, due to the surge in global oil prices following Russia’s invasion of Ukraine.

In May, Guilbeault told The Canadian Press that he expected those companies to invest these windfall profits into clean technology.