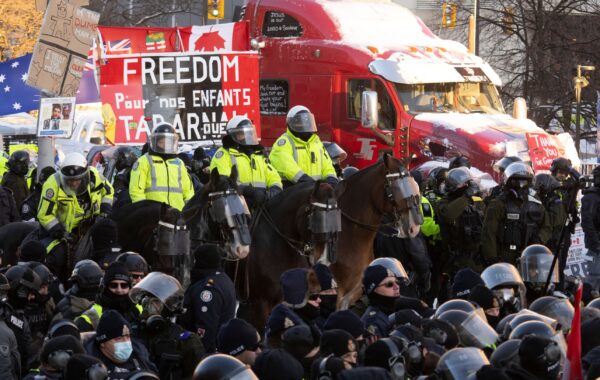 A mounted police unit lines up behind public order units on foot to clear protesters in Ottawa on Feb. 18, 2022. (The Canadian Press/Adrian Wyld)
Canada

The cost of the police response to the three-week-long protests in downtown Ottawa is estimated at $35 million, with additional costs still being realized, according to a financial status report for the Ottawa Police Service Board submitted on April 25.

The report says “the OPS has been informed by the federal government that it will receive additional funding through its National Capital Extraordinary Policing Costs program to offset all costs incurred by the OPS” due to the demonstrations.

The protest began in opposition to the federal COVID-19 vaccine mandate for truck drivers crossing back into Canada from the United States. As massive convoys of trucks arrived at the nation’s capital on Jan. 29, it spurred a national movement of supporters calling for an end to all pandemic-related restrictions and inspired similar protests worldwide.

In response to the protests, Prime Minister Justin Trudeau declared a state of emergency and invoked the Emergencies Act on Feb. 14, which gave police extraordinary powers to remove the protesters from Ottawa’s downtown core. These additional powers also allowed the federal government to freeze protesters’ and supporters’ bank accounts without a court order, as well as to compel towing companies to remove the protesters’ trucks and support vehicles parked in the city.

Trudeau revoked the act on February 23.

On April 25, the federal government officially launched a public inquiry into its use of the Emergencies Act, as is required by law within 60 days of the emergency declaration being cancelled.

The OPS said “lessons learned” from the Freedom Convoy protests are “already being acted upon,” which includes additional proactive policing and surge capacity measures implemented around events such as St. Patrick’s Day festivities last month.

“This increased planning and surge capacity posture will be required on a go-forward basis for events and demonstrations within the City of Ottawa,” the report says, adding that increased costs due to the events may also be recoverable from the National Capital Extraordinary Policing Costs program.

In a separate report for the OPS Board meeting on April 25, the police said more events and demonstrations are expected to ramp up in the spring and summer. The report said the OPS will take a “more robust approach” to police deployments in preparation for the 100 known events planned for Ottawa this year.

“The OPS is building out its Special Events team to have the capacity to meet the workload demand and support its ability to plan and manage events and demonstrations,” the report says.