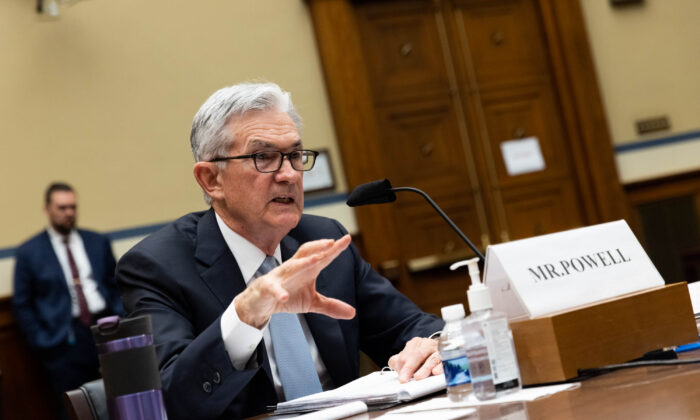 Federal Reserve Board Chairman Jerome Powell testifies at a House Coronavirus Subcommittee hearing on the Federal Reserve's response to the Coronavirus Pandemic on Capitol Hill in Washington, on June 22, 2021. (Graeme Jennings-Pool/Getty Images)
Economy

Inflation ran red hot in August, according to the Commerce Department, with the headline Personal Consumption Expenditures (PCE) index surging 4.3 percent over the year to a level not seen since 1991.

Meanwhile, the core PCE inflation index, which excludes the volatile categories of food and energy and is the Federal Reserve’s preferred inflation gauge, rose in the year through August at 3.6 percent, the Commerce Department announced on Oct. 1. August’s 3.6 percent annual core PCE growth matched the June and July figure, which was the highest level in 30 years.

That’s a rate of inflation well above the Fed’s 2 percent target, pressuring policymakers as they consider when to roll back some of the stimulus measures that helped lift the economy out of the pandemic lows but now appear increasingly out of kilter with rising prices.

Federal Reserve Chair Jerome Powell on Wednesday spoke of “tension” between inflation that is high and well above target and ongoing labor market slack, reflecting the Fed’s policy challenge of balancing its dual mandate of price stability and maximum employment. His remarks also conjured up the specter of stagflation—a condition of slowing economic growth and fast-rising prices that bedeviled the U.S. economy in the 1970s.

Some economists have warned that surging energy prices are inflicting major damage to struggling supply chains, pushing up the risk of stagflation. Others have expressed concern that supply-side woes more generally could combine with ultra-easy fiscal and monetary policies and high debt ratios to spark a full-blown stagflationary crisis.

While Fed officials have struck a more cautious tone on inflation in recent statements, they maintain it’s a temporary phenomenon that will abate once supply chain dislocations ease.

New York Federal Reserve Bank President John Williams said recently that consumer expectations for what the rate of inflation will be five years down the road “have barely budged” and they remain “well-anchored” at around the Fed’s 2 percent objective. He added, however, that there are upside risks and a “great deal of uncertainty” around the inflationary outlook.

The monthly core PCE gauge, which measures changes in the index from month to month, held steady at 0.3 percent in August, matching the July rate but down from 0.5 percent in June and 0.6 percent in May, according to the Commerce Department. This suggests peak inflationary pressures may have passed.

Powell told lawmakers on Thursday that he anticipates some relief from high inflation in the months ahead.