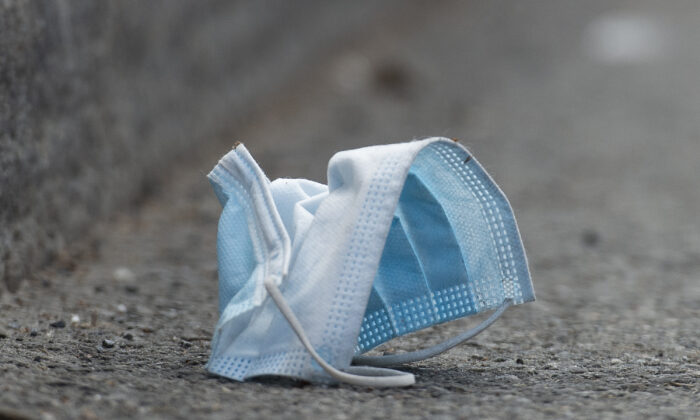 A disposable face mask is discarded on a street in Montreal, on April 18, 2021. (The Canadian Press/Graham Hughes)
Canada

The Department of Public Works is promising to disclose what it did to verify the credibility of federal COVID-19 suppliers.

Records show that rushed contracting for medical supplies along with theft cost Canadian taxpayers over $106 million, according to Blacklock’s Reporter.

“While the department established processes at the outset of the pandemic aimed at ensuring oversight and due diligence, the department recognizes procurement processes can always be improved,” staff wrote in documents submitted to the House of Commons public accounts committee, Blacklock’s reported.

“In the context of advance payments this includes undertaking financial checks such as validating suppliers’ financial capability in an emergency situation.”

The public accounts committee had requested a formal report from the Public Works Department “explaining how its internal processes for conducting checks verify the financial strength of suppliers before awarding contracts that involve advance payments,” to be submitted by Sept. 30. The department said it would comply.

In a March 31 Inquiry of Ministry, tabled in the House of Commons and obtained by Blacklock’s, cabinet disclosed the loss of $106 million in payments to suppliers for medical supplies that were never delivered.

One supplier, Tango Communications Marketing of Montréal, was sued by federal lawyers for the $82 million it was paid for the delivery of 37,000,000 masks from China. Deliveries were late and and the items shoddy, according to Ontario Superior Court records.

Blacklock’s reported that a separate supplier, 1245431 B.C. Limited of Toronto, was sued for $7.9 million, but the company “failed to meet their contractual obligations” over supply of high-grade N95 masks, said the Inquiry of Ministry.

The inquiry also calculated $1.2 million in losses of pandemic supplies due to theft. No details were provided.

In a staff email to the Prime Minister’s Office on April 5, 2020, political aides indicated they felt pressure to pay for medical supplies in a timely manner.

“We are losing deals because the Americans are moving faster than us so we are moving as quickly as possible to wire transfer money now,” staff wrote.