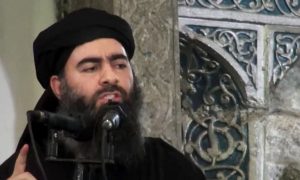 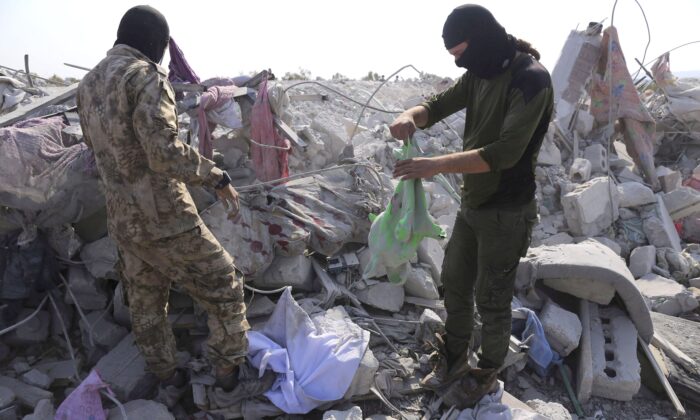 Two men stand in rubble near the village of Barisha, in Idlib province, Syria, on Oct. 27, 2019, after an operation by the U.S. military which targeted Abu Bakr al-Baghdadi, the shadowy leader of the ISIS terrorist group. The federal government says Canada's national-threat level remains at “medium” despite the leader of the Islamic State group having been killed over the weekend. (THE CANADIAN PRESS/AP, Ghaith Alsayed)
Canada

OTTAWA—The federal government showed no signs Monday of changing Canada’s national-threat level from its current classification of “medium” despite fears in some countries that the Islamic State group will launch retaliatory strikes over the killing of its shadowy leader during a U.S. attack.

On Sunday, U.S. President Donald Trump announced that Abu Bakr al-Baghdadi, the little-seen leader of the ISIS terrorist group, killed himself and three of his children during a U.S. special forces operation in Syria.

Prime Minister Justin Trudeau hailed al-Baghdadi’s death nearly five years after Canada and many of its allies declared war on ISIS, adding that Canada will continue to work with its partners and allies to ensure the group’s lasting defeat.

Canada has been an active participant in fighting the extremist group since October 2014 and currently has 850 military personnel in Iraq and the surrounding region, including special forces, military trainers, medical personnel and crews for transport helicopters and aircraft.

Egypt and the Philippines are among those countries that have stepped up security in the wake of al-Baghdadi’s death, fearing his killing, Trump’s description of his death and the military operation that led up to it could motivate ISIS’s followers to take revenge.

Yet Public Safety Minister Ralph Goodale’s office said Monday that Canada’s national-threat level has not changed from medium, where it has sat for the past five years.

The threat level represents the likelihood of a terrorist attack in Canada, based on available intelligence and information. The medium classification means “a violent act of terrorism could occur,” according to the government.

Al-Baghdadi’s death has had minimal impact on the Canadian military’s operations in the region, said Capt. Leah Campbell of the Canadian Joint Operations Command. Campbell declined to discuss specific details for security reasons.

While it’s conceivable al-Baghdadi’s death could be the catalyst some sympathizer in Canada has been waiting for to take action, University of Ottawa professor Thomas Juneau said that, “historically, it’s not clear there’s a pattern between the death of a leader and retaliatory attacks.”

He added that Canada doesn’t “have enough data to know one way or the other” that such an act could take place here.

The national-threat level was first elevated to medium in October 2014 when an ISIS sympathizer killed Warrant Officer Patrice Vincent in Saint-Jean-sur-Richelieu, Que., in retaliation for Canada deciding to send troops and fighter jets to fight the extremist group in Iraq.

One day after the threat level was raised, another ISIL sympathizer killed Cpl. Nathan Cirillo in front of the National War Memorial before storming Parliament Hill where he was gunned down by security forces.

Canada has seen several other run-ins with ISIL supporters over the years.

RCMP officers shot and killed Aaron Driver, 24, in Strathroy, Ont., after he set off an explosive device in August 2016. An ISIL flag was also found in the truck of a man found guilty last week of running down four people and stabbing a police officer in Edmonton in September 2017.

Juneau said he has studied how the threat-level is set and found it largely free of politicization, suggesting it is based upon the best available intelligence and information.

Al-Baghdadi’s death comes almost exactly five years after Canada and many of its allies first sent troops, fighter jets and other military assets to Iraq and the surrounding region to stop ISIS’s attempts to establish an Islamic caliphate governed by barbarism and terror.

ISIS was beaten back with the help of local forces, and all the territory it had once claimed for its caliphate was liberated. Still, the extremist group continues to pose a threat by going underground and turning to insurgent attacks in the Middle East.

By Lee Berthiaume, with files from the Associated Press