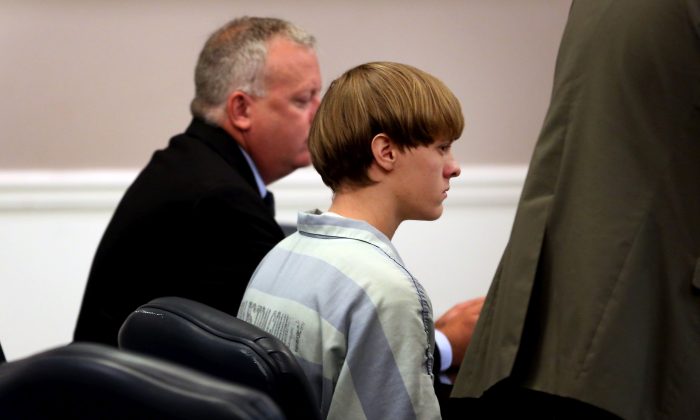 CHARLESTON, S.C.—A friend of the white man accused of shooting nine black churchgoers to death in Charleston is being investigated by federal authorities, an official said Wednesday.

A federal law enforcement official briefed on the investigation told The Associated Press that a letter was sent last month telling Joey Meek of Lexington, South Carolina, that he was under investigation for lying to law enforcement and for failing to report a crime despite knowledge of it.

The official spoke on condition of anonymity because the official was not authorized to speak publicly about the investigation, which was first reported by The State newspaper.

Meek has said Dylann Roof stayed with him in Lexington County before the June 17 shootings at Emanuel African Methodist Episcopal Church.

During an interview in June, Meek told the AP how Roof, while getting drunk on vodka, had complained that “blacks were taking over the world” and that “someone needed to do something about it for the white race.”

Meek, who claims he called authorities after recognizing Roof from surveillance footage from the church, says his friend also told him he used birthday money from his parents to buy a .45-caliber Glock semi-automatic handgun.

Lindsey Fry, Meek’s girlfriend, said he is worried about going to jail and trying to get a lawyer after receiving the letter from federal agents saying he is under investigation for lying to law enforcement.

Roof faces nine counts of murder and other charges in state court in connection with the killings at the church. Roof also faces dozens of federal charges including hate crimes and obstruction of the practice of religion.

The state has said it will seek the death penalty in the case. However, Roof’s attorneys say he is willing to plead guilty to the charges, including murder, in exchange for a life sentence.

“We are putting the court on notice that our client is willing to plead guilty to all charges for life without parole,” William McGuire said.

During a July hearing in federal court, another attorney for Roof said his client wanted to also plead guilty to 33 federal charges, but that he couldn’t advise his client to do so until federal prosecutors say whether they are seeking the death penalty.

Separately, a judge said during a hearing Wednesday in Charleston that he will allow the release of some police documents and other evidence in connection with the shooting.

Judge J.C. Nicholson said he wanted to sit down with attorneys for the victims and the news media to review some of the more graphic evidence — including photographs of the crime scene — before deciding specifically what will be released. The judge also indicated the 911 calls could be released, but that there had been no decision whether it would be the tapes or simply transcripts of what was said.

Nicholson said he was concerned about the graphic crime-scene photographs stemming from the shooting at Emanuel AMEW church in Charleston.

“I see no benefit or reason for the news media to have access to those photographs showing people dead on the church floor,” Nicholson said Wednesday during the hearing.

Various news organizations, including The Associated Press, earlier had challenged Nicholson’s order preventing attorneys from discussing the case and preventing the release of emergency calls, witness statements, coroner reports and other documents stemming from the June 17 shootings at Emanuel AME Church.

Attorneys for the victims’ families say the material should not be released because doing so would violate the victims’ rights to privacy.

The judge expressed concern earlier that the right to a fair trial for Roof could be compromised by the release of some of that material.

Jay Bender, an attorney representing The Associated Press and other media organizations during the hearing, said he expects it will be a couple weeks before Nicholson issues a decision.

Bender said he expects transcripts of the calls, not the actual 911 audio tapes, to be released.