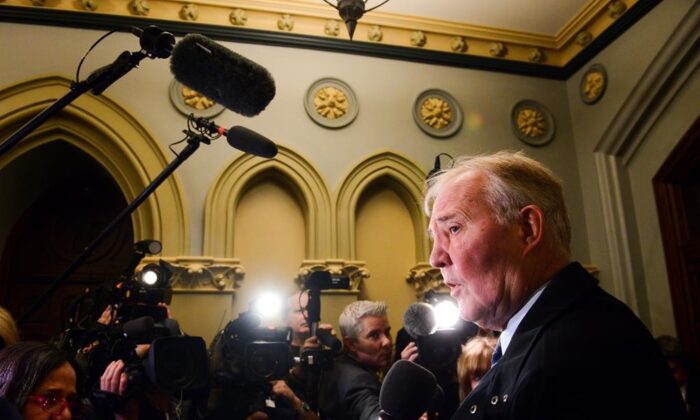 Public Safety Minister Bill Blair speaks at a news conference in Parliament Hill on the morning of Feb. 20, 2020. (Courtesy of The Canadian Press)
Canada

OTTAWA—Traditional chiefs from British Columbia at the heart of the Coastal GasLink pipeline protest are now in eastern Ontario, where federal cabinet ministers hope their proximity to the capital might mean a chance to sit down and talk about de−escalating the current impasse.

Blockades raised by some Indigenous people and other supporters of the Wet’suwet’en First Nation’s hereditary leaders have stopped rail traffic in eastern Canada and temporarily blocked roads, bridges and ports across the country.

Some Wet’suwet’en’s hereditary chiefs oppose the pipeline that would bring natural gas to a liquefaction facility and export terminal on the B.C. coast. But others in the community do support the project, including 20 First Nations bands along the route that have signed agreements with Coastal GasLink.

On Thursday, RCMP in B.C. sent a letter to the hereditary chiefs saying the force intends to move its officers out of the territory and station them instead in the nearby town of Houston.

Public Safety Minister Bill Blair said he believes this move meets conditions set by the Wet’suwet’en hereditary chiefs, who have been calling for the RCMP to leave.

“I believe the time has come now for the barricades to come down,” Blair said.

Countrywide protests and blockades followed a move by the RCMP to enforce a court injunction earlier this month against the hereditary chiefs and their supporters, who had been obstructing an access road to a Coastal GasLink work site. Twenty−eight people were arrested, including one hereditary chief.

The chiefs have demanded the RCMP leave their traditional land and have refused to meet with federal or provincial officials until this was done.

Blair said the decision to move officers away from their outpost on the traditional Wet’suwet’en territory was a decision made by the RCMP in B.C., not by politicians, although he was quick to say he believes it was the right move.

“It’s moving towards a less confrontational and a more peaceable arrangement entirely appropriate to the circumstances, and I’m very hopeful that will satisfy the concerns that were raised,” he said.

Trudeau spoke with premiers Thursday in a call with the Council of the Federation to discuss the disruptions to infrastructure caused by the blockades and how they are affecting farmers, businesses, families, and workers.

The Prime Minister’s Office said Trudeau highlighted that the government is looking at options to end the blockades as quickly as possible and reaching a peaceful and lasting resolution that builds trust and respect among all parties involved.

“Prime Minister Trudeau noted the RCMP’s offer to withdraw its operations from Wet’suwet’en territory, and the ongoing offer made by Minister of Crown−Indigenous Relations Carolyn Bennett to meet with Wet’suwet’en hereditary chiefs to address both urgent and longer term issues, following the Prime Minister’s letter to them,” the readout of the call says.

Four Wet’suwet’en hereditary chiefs have travelled east and are expected to meet with members of the Mohawk Nation in Quebec and Ontario to thank them for supporting their cause with their solidarity protests. Mohawks at Tyendinaga, between Toronto and Montreal, have blocked a critical rail line, cutting both freight and passenger traffic with coast−to−coast ramifications.

A gathering is being held Friday at Tyendinaga, where the Wet’suwet’en chiefs are to be welcomed and “political issues” discussed.

Bennett and Indigenous Services Minister Marc Miller said Thursday they were eager to meet the hereditary chiefs and hope this could possibly happen while they’re relatively close to Ottawa — The Tyendinaga territory is about 250 kilometres away by road.

The two federal ministers also say they are willing to travel to B.C. at a moment’s notice if the chiefs prefer to meet in their own territory.

“We are hopeful that (the RCMP’s move) will allow the conversations to continue,” Bennett said.

“We hope that the Wet’suwet’en will be able to express to those in solidarity with them that it is now time for them to stand down and let us get back to work.”

But one of the chiefs said his counterparts won’t meet with cabinet ministers in Ottawa. Na’moks, who also goes by John Ridsdale, said they must make decisions as a unit, and three senior chiefs have remained in northern British Columbia.

Progress is being made, he said, while reminding supporters to remain peaceful.

But Na’moks also noted the chiefs not only want the RCMP off their territory, they expect Coastal GasLink to remove its workers too.

Miller urged the Canadian public to be patient.

“Everyone wants to take the air out of this balloon in the most controlled way. The problem is most people are coming at us with a pin and that isn’t the right solution,” Miller said.

“There are some easy, expedient ways to resolve conflict, the problem is most of the time they’re not the right way, so I urge Canadians, I know the pain they’re going through, but we ask for a little more patience because there is a real opportunity to show the world that we can resolve these issues in a peaceful way.”

Ontario Conservative MP Erin O’Toole, who is running for his party’s leadership, issued a statement Thursday saying if he were prime minister, he would criminalize blocking transportation corridors and issue a blanket policy telling police to clear blockades without waiting for court orders.

Less than 24 hours earlier, his main competition for the leadership, former justice minister Peter MacKay, tweeted support for counter−protesters in Edmonton who dismantled a barricade there — later deleting the tweet and issuing a statement saying the “illegal blockades and vigilante reactions by those frustrated by the prime minister’s actions are dangerous,” accusing Trudeau of offering only platitudes in the face of a crisis.

Outgoing Conservative Leader Andrew Scheer repeated his criticism of the protesters Thursday and questioned the wisdom of meeting the traditional chiefs’ demands.

“My concern is what happens now? Now that these people who have been breaking the law, these radical activists see that they can get concessions from this government, what kind of a message does that send and what future protests, what future illegal activity will that see for future projects?”

One of those projects could be the Trans Mountain oil pipeline, which the Liberals bought and pledged to get finished despite opposition from many quarters, including some Indigenous groups.