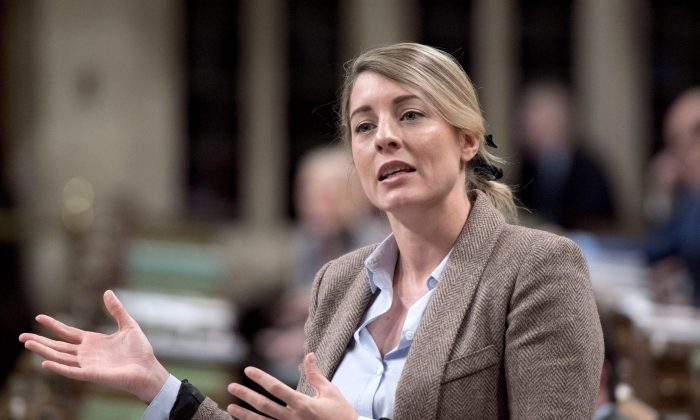 Heritage Minister Melanie Joly rises during question period in the House of Commons on Nov. 24, 2017. Ottawa is coming under fresh pressure to find a way to rescue the ailing Canadian newspaper industry. (The Canadian Press/Justin Tang)
Canada

Ottawa is coming under fresh pressure to find a way to save the ailing Canadian newspaper industry, although the Liberals remain steadfast in their argument that the solution lies in the transition to digital platforms and more viable business models.

Torstar Corp. and Postmedia Network Inc. announced Nov. 27 they will cut nearly 300 jobs as they plan to shutter more than 30 newspapers across the country, with most of the dailies and community weeklies affected based in Ontario.

Earlier this year, a major report from the Public Policy Forum called for a sales tax on foreign companies selling digital subscriptions in Canada and a $400 million fund to help finance reliable news and information.

And in June, the House of Commons heritage committee also issued recommendations on how to save the industry, including a five-year tax credit to compensate print outlets for a portion of their digital investments.

But in September, Joly unveiled a cultural strategy that was criticized by industry experts for lacking measures that could have given a boost to struggling newspapers across Canada.

At the time, Joly said Ottawa had no interest in bailing out industry models that are no longer viable, and would instead focus on supporting innovation, experimentation, and the transition to digital platforms.

Asked if news of the upcoming closures had encouraged her to rethink her approach, Joly reiterated that the government would provide support in the coming months for local media as they continue to shift to web-based models.

She also noted the federal government invests up to $75 million annually in the Canada Periodical Fund, which includes support for local media.

Joly’s office said the government is looking at modernizing the Canada Periodical Fund in ways that could help local news outlets, such as by moving away from funding based on paid print circulation, which does not account for a digital audience.

Helping print media out of a crisis does not have to be about propping up a failed business model, said Dias, one of several prominent Canadian business leaders who took part in consultations on the future of the industry.

Conservative MP Peter Van Loan, who is the heritage critic for his party, said he thinks the newspaper chains are making a mistake by shutting down the local papers, but said the federal government should not intervene.

“When you have dynamic change, the answer is not to have government fund money to turn back the clock and try to keep an old model alive that doesn’t work anymore,” said Van Loan, whose own Ontario riding of York-Simcoe is also losing a local paper, the Bradford Times.