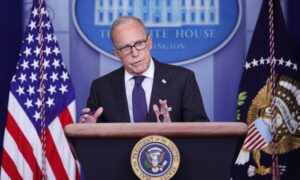 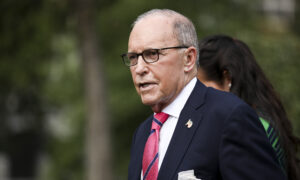 Kudlow Says Republicans, Democrats in a 'Stalemate' on Pandemic Relief
0 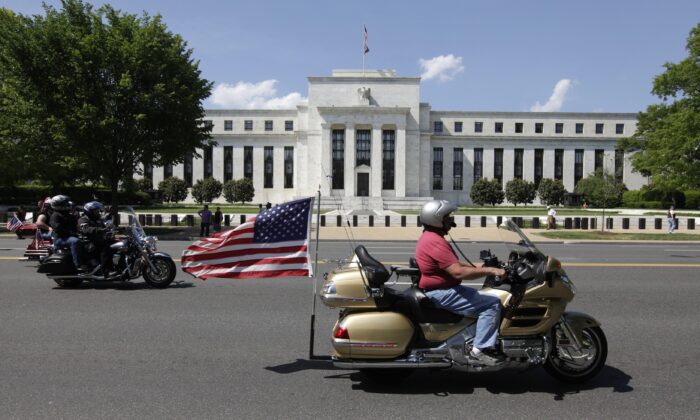 A motorcyclist rides by the Federal Reserve building in Washington, on May 24, 2015. (Chris Kleponis/AFP/Getty Images)
Economy

Kansas City Federal Reserve President Esther George said in multiple interviews that, despite the risk of a double-dip recession, her baseline case is that the U.S. economy will continue to improve.

“An important risk to that outlook is thinking about what happens as we come into the fall, whether we see any resurgence in the virus that would cause an additional pullback in the economy,” she told CNBC in an interview that aired Aug. 26, adding that Fed officials will be keeping a close eye for signs of that risk materializing.

In a separate interview on Fox Business, she said: “I think my forecast is the economy will continue to grow, given the right supports. And so that’s what I’m looking forward to.”

Policymakers in government and in the Federal Reserve system took unprecedented action to blunt the economic impact of the Chinese Communist Party (CCP) virus, with Congress authorizing around $3.6 trillion in new spending since March and the Fed dropping rates to near zero and exploding its balance sheet to flood markets with liquidity and support the flow of credit to households and businesses.

Echoing remarks by other Fed officials, George said the path to economic recovery would depend on the course of the virus.

“I think for now, what we are seeing is signs of life,” George told Fox News. “We are beginning to see the economy come back online. But, of course, that’s tentative at this stage. And so we’re going to need more time. And importantly, we’re going to need to know really the path of the virus and resolution to that before we can really make firm assessments about where the economy is headed.”

George, who in the past has been lukewarm on the idea of loose monetary policy, told Bloomberg on Aug. 26 that she isn’t opposed to some overshooting of the central bank’s 2 percent inflation target, adding that she sees deflation as a bigger risk under the current economic environment than upward price pressure.

“I have never thought of 2 percent as a ceiling, but to really stay focused on what anchors inflation expectations in the economy,” George told Bloomberg.

There has been much speculation about whether central bank policymakers will, at a meeting in September, change the way the Fed characterizes its inflation goal. Rather than looking to achieve 2 percent inflation on an annual basis, the Fed is expected to aim to achieve that level as an average over a longer time, and potentially explicitly allow what could be years of faster price increases to make up for years when it believes prices rose too slowly.

“There is a growing realization that a 2 [percent] inflation target as originally put in place in the U.S. and around the world is not quite enough,” St. Louis Fed President James Bullard said in a recent interview with Reuters. Changing the framework could help “shore up the target and get expectations to stay at 2 [percent],” he said.

Core inflation, excluding food and energy prices, is currently running at 1 percent, while the overall inflation rate is 0.5 percent.

George’s remarks come amid growing signs that the economy’s recovery from the pandemic is slowing or even reversing, with speculation mounting about whether the U.S. economy is headed for a double-dip, or W-shaped path of recovery. At least 28 million people are collecting unemployment benefits and bankruptcies are rising as government aid rolled out at the start of the pandemic dries up. Regional Federal Reserve surveys showed a moderation in factory activity in the New York state and the mid-Atlantic regions this month, while consumer confidence fell to a six-year low in August.

“The trends in economic indicators have not changed significantly,” economists at Bank of America Securities wrote in a research note. “We likely need to see daily COVID-19 cases decline much more significantly in order for gains in economic activity to accelerate meaningfully.”

George notably said in a speech in June (pdf) that the pandemic-driven recession was unique, as unlike typical downturns, it wasn’t driven by a buildup of inflation or a sudden unwinding of financial imbalances after an unsustainable buildup.

“The coronavirus shock came from outside the economy. An otherwise healthy economy was more or less put into a medically induced coma to protect the public’s health with policies that allowed only businesses deemed essential to remain open,” she said at the time, adding that the measures taken to fight the CCP virus also were unusual in their effects on the economy.

“The need for social distancing has taken a particularly heavy toll on the consumption of services. The services sector is often relatively stable in a downturn,” she said, adding, “this time services are leading the decline.”

“Although the future is always uncertain, slow growth and low rates are widely expected to persist,” the Kansas City Fed said in a statement ahead of its 44th annual Economic Policy Symposium, scheduled for Aug. 27 and Aug. 28. The event is typically held in Jackson Hole, Wyoming, but this year, due to the pandemic, it will take place online and be streamed to the public.

Federal Reserve Chairman Jerome Powell is due to speak at the virtual symposium on Aug. 27, when investors think he could outline a more accommodative approach to inflation.

“Jackson Hole is a big one,” said Jeremy Gatto, an investment manager at Unigestion in Geneva. “Investors are expecting a bit more clarity on what the Fed is looking at. We are likely to see a high level of accommodation for some time to come.”

Some economists fret that even if the Fed changes its policy framework to allow inflation to run hot, this might not be enough to stimulate the economy.

“The situation is really perilous right now and there is little that monetary policymakers at this point have left in their arsenal,” said David Wilcox, former head of the Fed’s research division and now a senior fellow at the Washington-based Peterson Institute for International Economics.

Wilcox said he fears the Fed’s expected new framework will seem abstract unless it is coupled with new steps to enforce it, such as massive new bond-buying or the setting of explicit unemployment goals.

The minutes from the Fed’s last policy meeting indicated those steps may be coming further down the road in order to give the central bank time to see how the economy behaves at this stage of the pandemic.

“I think it is too soon to try to speculate on what else the might be needed, other than to say the Federal Reserve is going to be very vigilant on that and be prepared to respond,” George told CNBC, referring to additional policy measures the Fed could take to help the pandemic-stricken economy recover.