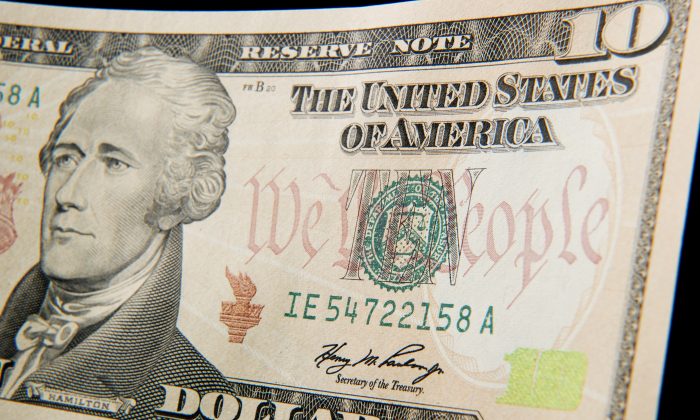 The federal government cashed in big in April, climbing highest ever into the black.

The treasury received $515 billion and spent $297 billion, making for a record surplus of $218 billion, according to a Congressional Budget Office (CBO) estimate.

April is traditionally the best month for the federal budget—that’s when the government collects the bulk of tax payments for the previous year.

The previous record surplus of some $190 billion from April 2001 would be higher if adjusted for inflation.

Still, this April’s results are $30 billion to $40 billion higher than the CBO expected in its forecast less than a month ago.

CBO estimates can be off by a few billion. The Treasury is scheduled to release the official numbers on Thursday, May 10.

In short, people may have worked more, are getting paid more for the same amount of work, or both, resulting in more taxes.

In addition, withheld individual income tax and withheld payroll taxes rose by $7 billion (or 4 percent), despite people already paying less due to President Donald Trump’s historic tax cut bill. On the other hand, April had one more business day this year than the last, which also pushed the withheld tax a bit higher.

The economy has been on a streak of exceeding expectations thanks partly to the “Trump effect”—a boost to confidence in the economy linked to Trump’s cuts to regulations, taxes, and planned investment in infrastructure.

The unemployment rate fell to 3.9 percent in April. The only time it has ever dropped so low since 1969 was in April 2000, according to the Bureau of Labor Statistics.

Also, private sector wages and salaries grew in the first quarter at the fastest pace since 2007. Claims of unemployment benefits fell to the lowest level since 1969 in the week ending April 21.

The government, however, hasn’t been so comfortable. Tax cuts combined with increased spending made for an extra poor February and March, both with deficits over $200 billion. Aside from ever-increasing Medicare, Medicaid, and Social Security bills, the higher inflation has pushed up interest payments on government debt. Trump’s boost to the military budget and a hike in disaster relief spending added to it too.