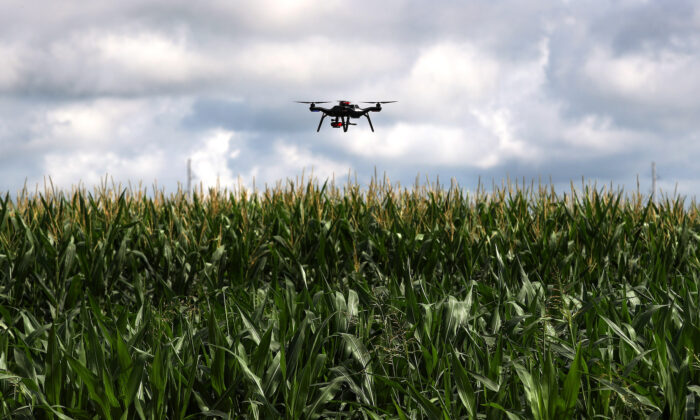 A drone is used to survey a corn research field in College Station, Texas, on May 23, 2018. (Reuters/Adrees Latif)
US News

FORT MORGAN, Colo.—Groups of what may appear to be drones have been spotted buzzing over rural parts of northeastern Colorado and western Nebraska for weeks, unnerving residents. Now, U.S. officials are working with state and local authorities to determine who is behind the mysterious nighttime flights.

The suspected drones reportedly have 6-foot (2-meter) wingspans and fly in grid-like patterns hundreds of feet in the air in groups of six to 10. The Federal Aviation Administration (FAA), the Drug Enforcement Administration, the Air Force and the U.S. Army Forces Command have said they do not have information about the aircraft.

“We take every drone-sighting report seriously,” the FAA said in a statement after Monday’s meeting. “Multiple FAA divisions are working closely with federal, state and local stakeholders to try to determine whether the reported sightings in Colorado and Nebraska are drones and, if so, who is operating them and for what reason.”

The FAA said it has contacted drone test site operators and drone companies but has not determined if they were behind the flights. The agency also has been in touch with several airports in the area, warning pilots to be cautious and asking them to report any sightings.

Meanwhile, the Phillips County Sheriff’s Office in northeastern Colorado posted on Facebook that a task force has been organized and is asking the public to be on the lookout for a “command vehicle” that is operating the suspected drones. The vehicle could be a closed box trailer with antennas or a large van that seems out of place, the post said.

Sheriff’s officials say it appears that no laws are being broken. Drone pilots are not required to file flight plans unless they are in controlled airspace, such as near an airport.

Phillips County Sheriff Thomas Elliott told The Denver Post in December that the suspected drones remain about 200 to 300 feet (61 to 91 meters) in the air and fly steadily in square patterns of about 25 miles (40 kilometers).

“They’ve been doing a grid search, a grid pattern,” he said. “They fly one square and then they fly another square.”

Authorities in several Colorado counties have been getting calls about the devices.

Martin, the sheriff in Morgan County, Colorado, did not respond to a request seeking comment about the meeting.