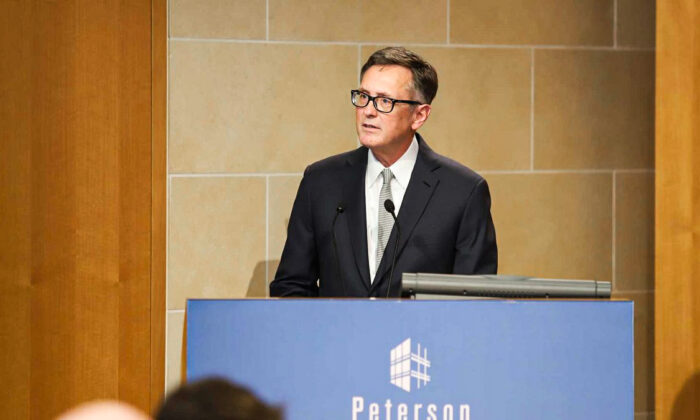 Federal Reserve Vice Chairman Richard Clarida said on Nov. 8 that inflation this year has been far higher than the Fed expected, and while he still believes inflationary pressures are transitory and will dissipate “over time,” a longer run of elevated prices would amount to a policy failure on the part of the central bank.

Clarida made the remarks in a speech at a virtual symposium on monetary policy frameworks hosted by the Washington-based Brookings Institution.

“Let me be clear on two points. First, realized PCE inflation so far this year represents, to me, much more than a ‘moderate’ overshoot of our 2 percent longer-run inflation objective, and I would not consider a repeat performance next year a policy success,” he said.

“Second, as always, there are risks to any outlook, and I and 12 of my colleagues believe that the risks to the outlook for inflation are to the upside.”

His remarks come as the Fed’s preferred inflation gauge, the so-called core PCE price index, rose in the 12 months through September at a pace of 3.6 percent, according to the most recent Commerce Department data, released on Oct. 29. The 3.6 percent core PCE growth in the year through September matched the June, July, and August figures, indicating that inflation stuck at its highest annual level in 30 years for the fourth month in a row.

“The baseline outlook for inflation over the three-year projection window reflects the judgment, shared with many outside forecasters, that under appropriate monetary policy, most of the inflation overshoot relative to the longer-run goal of 2 percent will, in the end, prove to be transitory,” he said.

Blaming “substantial” imbalances between supply and demand, including labor supply, for pushing inflation higher, Clarida said he expects that “these imbalances are likely to dissipate over time as the labor market and global supply chains eventually adjust and, importantly, do so without putting persistent upward pressure on price inflation and wage gains adjusted for productivity.”

A number of economists have warned that if the Fed is too far behind the curve on acting to tame surging inflation, it could force the central bank to take more drastic steps later and upend markets.

Clarida said in his remarks to the conference that, while “we are clearly a ways away from considering raising interest rates,” if his prediction for the PCE inflation rate holds, as do Fed forecasts for a drop in the unemployment rate to 3.8 percent by the end of 2022, then he believes the necessary conditions will be met for a rate increase by the end of 2022.