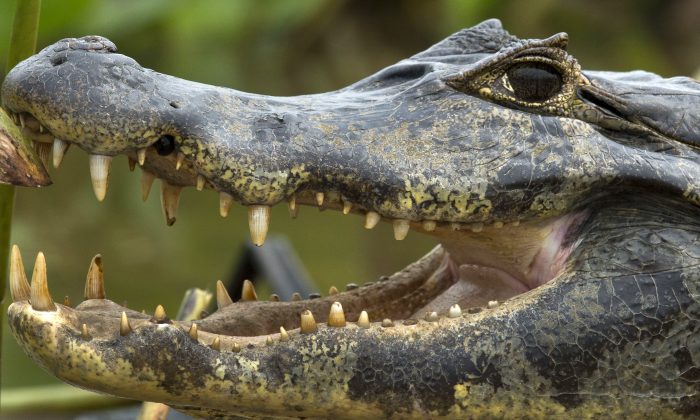 A caiman (Caiman yacare) rests on one of the banks of the Paraguay River, in Cáceres, Brazil, the gateway to the Pantanal, on Aug. 26, 2014. (Nelson Almeida/AFP/Getty Images)
US News

Federal prosecutors have charged 75 people who they said belonged to a multimillion drug trafficking ring that controlled the streets in Puerto Rico with barricades and control barriers, and fed rival gang members to their pet caimans.

U.S. Attorney Rosa Emilia Rodriguez announced on Feb. 27 that 75 members of Las FARC had been charged with possession with intent to distribute, and distribution of, controlled substances from 2006.

The gang, which operated in the capital San Juan, brought in controlled substances, mainly cocaine, which they distributed to the continental United States.

According to the Department of Justice, the gang’s leaders would routinely authorize sellers to provide free “samples” of narcotics to promote the sales of specific drugs—including crack, heroin, cocaine, marihuana, Oxycodone (commonly known as Percocet) and Alprazolam (commonly known as Xanax).

The drugs were distributed in housing projects and within 1,000 feet of schools and playgrounds.

Las FARC, translated as “The Revolutionary Armed Forces of Cantera,” was a violent gang that aimed to “maintain control of all the drug trafficking activities with the in Santurce area by the use of force, threats, violence, and intimidation,” according to Justice Department Statement.

They would often “abduct” and assault rival drug traffickers as well as members of their own drug trafficking organization.

“We learned that they would throw their victims, and the bodies of those they had murdered, to their caiman,” U.S. Attorney Rosa Emilia Rodriguez told reporters at a press conference, reported NPR.

“They had [the caimans] as a domestic animal in their homes,” Rodriguez said, adding that the investigation by federal agents was called “Operation Crocodile.”

Caimans are small alligator-like reptiles found in South America. There are six species, most of which grow to a maximum of about 7 feet in length. The largest species, the black caiman can reach 16 feet in length.

According to prosecutor Alberto Lopez, the group is linked to more than a dozen killings, although he didn’t say how many of these were fed to the caimans.

According to the Justice Department, the gang protected its territory with barriers and barricades of large water tanks, access control barriers, and steel gate poles. “These barriers would stop the entry of law enforcement agents and/or members of rival gangs,” said the statement.

DEA Caribbean Division Special Agent in Charge A.J. Collazo stated, “This organization was responsible for placing crack, heroin, and marijuana in the hands of lives who later suffered addiction, death, and other situations, none of them positive for them, their families, nor society.”

According to ABC, the organization had amassed nearly $76 million, which according to the prosecutors was spent on real estate properties, nightclubs, motor vehicles, vessels, hotel accommodations, and private parties.

All the defendants are facing a narcotics forfeiture allegation of $75,949,040 and four other properties listed in the indictment.

“The laundering of illegal drug profits is as important and essential to drug traffickers as the very distribution of their illegal drugs,” said Collazo. “Without these ill-gotten gains, the traffickers cannot finance their organizations.”

The gang’s influence reached far beyond the housing projects where they distributed drugs, however.

“A lot of the [cocaine] that was coming in from South America was ending up in the continental United States,”  said Rodriguez.

Rodriguez stopped short of saying that the indictments were a fatal wound for Las FARC but said it “represents a significant blow.”

All defendants face a minimum of 10 years in prison, she said.

Twenty-seven defendants are also charged with possession of firearms in furtherance of a drug trafficking crime.