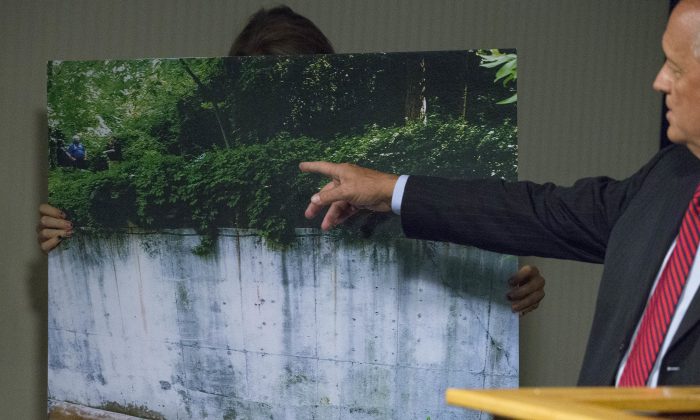 Hamilton County Prosecutor Joe Deters points to an image of the moat wall of the Gorilla World enclosure as he speaks to members of the media during a news conference on an incident involving a child who was hurt after circumventing its barriers and fell into the moat, Monday, June 6, 2016, in Cincinnati. A gorilla named Harambe was killed by a special zoo response team on Saturday, May 28, after concluding the 3-year-old boy's life was in danger. (AP Photo/John Minchillo)
Politics

A barrier separating Cincinnati Zoo visitors from a gorilla exhibit wasn’t in compliance with standards when a 3-year-old boy managed to slip inside, resulting in the shooting death of an endangered gorilla named Harambe, federal inspectors concluded.

The U.S. Agriculture Department inspection report, obtained Thursday by The Associated Press, also stated that the zoo’s dangerous-animal response team properly followed procedures after visitors called 911 on May 28 to report a child in the gorilla enclosure. A team member concluded the child was in “life-threatening danger.”

The death of the 17-year-old male western lowland gorilla led to mourning around the globe and a storm of criticism and unending social media attention.

The zoo quickly made the barrier taller and added nylon mesh and surveillance cameras. The zoo said there had been no previous problems in the Gorilla World exhibit’s 38-year history and its barriers were always found compliant in earlier federal inspections, including in April.

The federal investigation is continuing and could lead to fines or other disciplinary action.

The department’s animal welfare arm confirmed that the zoo’s barrier system had been considered to be in compliance during earlier inspections.

“It became apparent on May 28 that the barrier was no longer effective,” Espinosa said via email. “The Cincinnati Zoo took swift and comprehensive corrective action in response.”

Zoo Director Thane Maynard said it will continue to work with authorities to ensure its exhibits meet or exceed standards.

“We remain committed to visitor and animal safety,” Maynard said.

The Agriculture Department inspectors said in a report dated June 6 that there had been “some slack” in wire cables in the barrier that could have been “manipulated to an eight-inch gap.” Beyond the barrier were bushes and other landscaping that was 18 to 24 inches tall, followed by a 15-foot drop-off into a moat.

The report stated that visitors had notified a keeper and called 911 to report that a child was in the exhibit, and the keeper activated the zoo’s emergency response.

A member of the Dangerous Animal Response Team arrived in about nine minutes, the report stated. It said Harambe didn’t respond to attempts to return him to the gorilla holding area after making contact with the child, dragging the boy by the leg in the shallow moat water and again on the ground.

“The DART team member determined the child’s life to be in imminent, life-threatening danger and shot the gorilla with a single gunshot and the gorilla died instantly,” the report stated.

The boy, who had slipped away from his mother, recovered without major injury. Hamilton County Prosecutor Joe Deters concluded after an investigation that no charges were warranted.

Animal rights activists and other gorilla fans expressed anger at Harambe’s death, and it became the subject of countless memes and popular culture references. The zoo recently reactivated its Twitter account after suspending it because of hacks by critics.