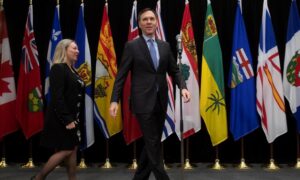 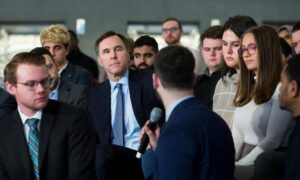 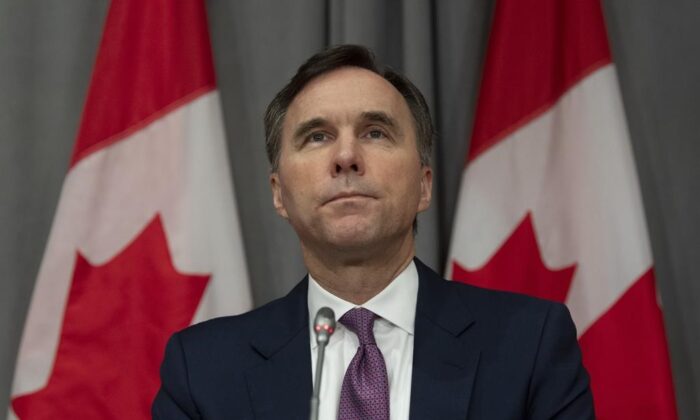 OTTAWA—The country’s largest employers will soon be able to land federal financing to help weather the COVID-19 economic crisis, but are being warned they’ll need to open themselves to financial scrutiny for any tax evasion and prove their commitment to fighting climate change.

The Liberals are promising bridge financing to companies with at least $300 million in revenues so they can stay open, keep employees on their payrolls and avoid bankruptcies of otherwise viable firms, wherever possible.

Loans would begin at $60 million, be on commercial terms, and require companies to have already gone to banks or the market and been unable to meet their financial needs.

In announcing the program Monday, the government said taxpayers’ dollars would not be used to rescue companies that faced insolvency before the crisis.

Goldy Hyder, president of the Business Council of Canada, called the program an important step for large- and medium-sized companies because “there is no doubt at all about the need.” He said companies were looking for more details about how to apply.

Morneau said rules will place limits on the ability of companies to restructure, the payment of dividends, share buybacks and using the money towards excessive executive compensation.

The government is also promising rules to protect pensions and collective bargaining.

“Help must go to workers, not to CEOs,” NDP Leader Jagmeet Singh said in a statement. “And any company cheating the public by not paying their fair share of taxes, must not get any help from the public.”

Applicants will have to reveal how they are structured at home and overseas with officials looking for aggressive tax avoidance, Trudeau said. Any companies convicted of tax evasion won’t be eligible for help.

Companies that ask for the help will also have to show how they are contributing to reducing greenhouse gas emissions over the coming years, tying the cash to the Liberals’ promises on the environment. That will include oil and gas companies that are also facing a hit from a global drop in oil prices.

“My question for Mr. Morneau is: Is this the package that he’s promised the oil and gas sector? Because if this is it, this is certainly not what was promised nor what was expected,” Conservative Leader Andrew Scheer said Monday.

Scheer called on the Liberal government to ease the requirements around financing programs for small- and medium-sized businesses to ease their access to help, including self-employed or family-run businesses that receive dividends, seasonal companies, or those that don’t have large payrolls.

The Liberals are promising to extend the $73-billion wage subsidy program. The legislation that created the created the program allows the government to extend the qualifying periods through to the end of September.

Federal officials are conducting a detailed analysis of economic pain points to see what extra measures may be needed for companies.

Federal figures posted Monday showed more than 7.8 million people have applied for the Canada Emergency Response Benefit, which has paid out almost $30.5 billion in benefits. The program is budgeted at $35 billion to help workers who have seen steep drops in income.

Last week, Statistics Canada reported that some three million people were out of work since public health restrictions came into effect in March, with 2.5 million more with their hours slashed.

The figures came out Friday after the headline job-loss figure for April was leaked, prompting an internal investigation into the highly unusual breach.

“We will be leaving no stone unturned,” Morneau said of the federal and Statistics Canada probe. “We need to make sure that information that’s important like this, that can be market-moving, is kept confidential right up until the time that it is released publicly.”

By Jordan Press with files from Lee Berthiaume