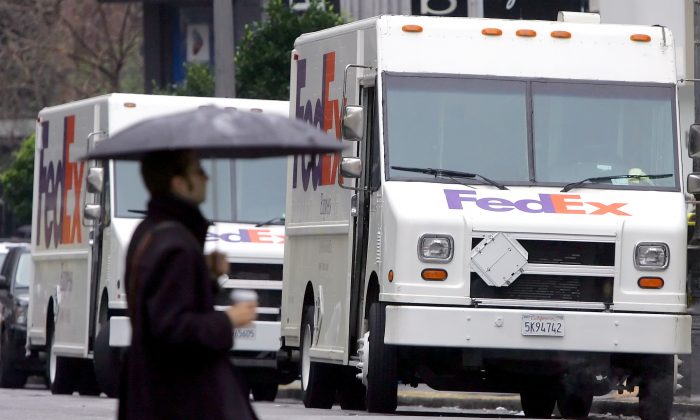 A man walks by two FedEx trucks in San Francisco, Calif., in this 2005 file photo. A explosion in the city's SOMA neighborhood was caused by firecrackers, police said after an investigation. (AP Photo/Jeff Chiu)
Northern California

UPDATE: All streets in the area are now open or will soon be open following the investigation, according to San Francisco’s emergency department.

The San Francisco Police Department was investigating an explosion that happened in the city’s SOMA district on Wednesday afternoon. The investigation was wrapping up at about 3:30 p.m. Police officials believe someone threw a firecracker or multiple firecrackers underneath the truck, according to KGO.

The explosion happened near 6th Street and Tehama Street. A driver called 911 to report he heard a loud explosion at the rear of the FedEx truck. A bomb squad arrived and found signs of an explosion on the vehicle but didn’t find any explosives nearby.

The city’s emergency department told the public via Twitter at 2:23 p.m. PDT to “Avoid the general South of Market area for the next hour near Tehama & Howard around 5th & 6th as traffic is disrupted for police activity.” However, the department said at 3:06 p.m. that police activity has concluded and that the public should expect the area to be re-opened shortly.

San Francisco Muni service was being diverted in the area because of the police activity. The city’s MTA said to expect residual delays on the 8X, 27,30, and 45 routes through the area. It hasn’t yet issued an update.