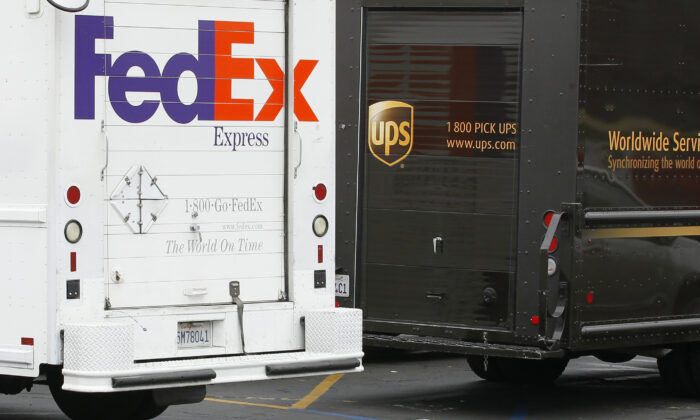 A FedEx truck is parked next to a UPS truck as both drivers make deliveries in San Diego, Calif., on Mar. 5, 2013. (Mike Blake/Reuters)
Business Columnists

The sector is a leading indicator of the bad things to come.
By J.G. Collins

FedEx, the global delivery and logistics company, withdrew its forward guidance after the market closed on Sept 15.  The share price collapsed by more than 16 percent in after-hours trading.  On Sept. 16, FedEx (FDX) shares opened sharply lower and closed down 21.4 percent by the time the market closed.

To give you a notion of how precipitous the decline in FDX business is, think of this: In June, FDX stated that revenues would be $24.4 billion. The new estimate, out on Sept. 15, was $22.0 billion, so the company wrote down $2.4 billion, and most of that apparently was coming as “trends significantly worsened later in the quarter, both internationally and in the United States.” Non-generally accepted accounting principles earning per share (GAAP EPS) were down. from $6.87 to $4.37, a decline of $2.50 per share.

The press release on Sept. 15 was a warning shot. FDX will be reporting quarterly earnings on Thursday.

The Dow Jones Transportation Index (DJTI) has also collapsed precipitously since the beginning of this month. and was down another 5 percent on Sept. 16.

Transports are a leading economic indicator. Research from 2014 showed that the peak and trough of economic cycles correlated with the growth and recession by about four months. It is said that the transports “take” what the industrials “make.”  From what the monthly data indicate, as of July, and measuring from February, inventories are rising faster than sales at the steepest rate (outside recession) in 20 years.

Another reason that the FedEx stock price collapse is so disconcerting is that it has a beta close to 1.0 (0.8 and 1.2, over two and five years, respectively).

Having as sharp a drop-off  of a major player in the sector like FDX should be viewed as a warning of things to come among the broader market.

Beta is a stock’s volatility relative to the overall market. Stocks that correlate with the movements of the market, such as the index, have a perfect correlation of “+1” by definition. Many of the other transports are similarly correlated. UPS, for example, has a five-year beta of 1.07 and J.B. Hunt, 1.13. So the transports/logistics sector tends to move with the market. Having as sharp a drop-off  of a major player in the sector like FDX should be viewed as a warning of things to come among the broader market.

China’s GDP was recently cut to just 2.7 percent by Nomura; in Japan, the Bank of Japan cut its growth estimate to 2.0 percent; the European Commission estimates a growth rate of 2.7 percent; Great Britain, 2.3 percent; and in the United States, the Conference Board estimates GDP growth of just 1.4 percent. And all those estimates are from earlier, not later, in the quarter, when FedEx saw its operations fall off.  We note, too, that in our August jobs report that the transportation and warehouse sector added only 4,800 jobs, down from 24,600 in July, further evidence that the sector—again, a leading economic indicator—is falling off.

The United States, of course, has had two consecutive quarters of negative GDP growth. The National Bureau of Economic Research will declare whether that constitutes a “recession” (though it has not failed to do so since 1947). But investors and businesses should beware. As I related in an earlier essay, we’re in an environment where we’re looking at margin pressure and demand destruction. Stagnant or declining real wages in an inflationary environment will force people to cut back spending. And that will be a harsh wake up for the economy.

Investors should take appropriate steps to safeguard their portfolios.

_________________________________________________
Additional disclosure: The views expressed, including the outcome of future events, are the opinions of the firm and its management only as of Sept. 18, 2022, and will not be revised for events after this document was submitted to The Epoch Times editors for publication.  The writer holds no interest in the statements herein, and they do not represent, and should not be considered to be, investment advice. You should not use this article for that purpose. This article includes forward-looking statements as to future events that may or may not develop as the writer opines. Before making any investment decision, you should consult your own investment, business, legal, tax, and financial advisers. We associate with principals of TechnoMetrica on survey work in some elements of our business.

We have no stock, option, or similar derivative position in any of the companies mentioned, and have no plans to initiate any such positions within the next 72 hours. I wrote this article myself, and it expresses my own opinions. I am not receiving compensation for it (other than from The Epoch Times as a business columnist). I have no business relationship with any company whose stock is mentioned in this article.