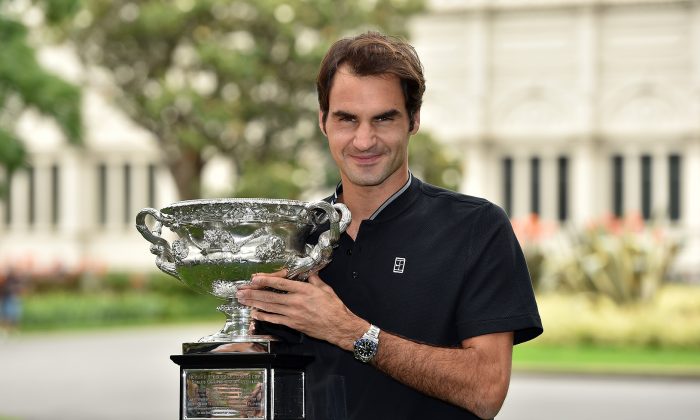 Roger Federer has been waiting to add to his 17 Grand Slam titles since his last Wimbledon win in 2012.

At 30 years old, Federer was thought to be nearing the end of an illustrious tennis playing career. But Federer’s playing style was not so demanding on the body, he floated around the court, winning with exquisite shots and skillful placement – he played an artistic and strategic game not an all-out power game so it was not so demanding on his body. Although suffering with occasional back and knee problems he has continued to be fit, even though in recent years he has tended to use more power.

Over the last 5 years, Federer has continued to reach the later stages of the top tournaments, only to be thwarted at the final hurdles, mainly by Rafael Nadal, Novak Djokovic and Andy Murray. But maybe it was a “twist of fate” that allowed Federer to succeed in Melbourne to win the 2017 Australian Open on Sunday Jan 29.

Andy Murray was curiously knocked out in the 4th round by Mischa Zverev of Germany ranked 50, and even more surprisingly Novak Djokovic lost in round 2 to Denis Istomin of Uzbekistan, ranked 119.

Meanwhile, old timers, Federer and Nadal had both been recovering from injury and had just returned for the Australian Open, so were rested and in better physical shape although short of top level match practice. Federer was in the top half of the draw and Nadal in the bottom.

Federer was seeded 17 after his 6 month lay-off and Nadal was seeded 9th. Both progressed to the quarter finals with Federer beating Tomas Berdych in 3 sets in round 3, Japan’s Kei Nishikori in a tough 5 setter in round 4 and Mischa Zverev succumbed in 3 sets in round 4. In the semi-final Federer met fellow countryman Stan Wawrinka, now the top ranked Swiss player. Wawrinka had beaten Federer on a number of recent meetings but in this match Federer pulled out a 2 set lead before Wawrinka hit back to square the match but Federer won the 5th game 6-3 to reach the final.

Nadal traveling on the other path also battled his was through to the semi-final where he had a tough 5 setter with Grigo Dimitrov of Bulgaria, but came through 6-4 in the 5th for another Federer to Nadal final.

In their previous 8 Grand Slam Final meetings Federer had only won twice, and the last time at Wimbledon final in 2007. Nadal won against Federer in the French and Wimbledon Opens in 2008, in the 2009 Australian Open and in the French Open in 2011.

This time it was Federer’s match, but it was a close 5 set match befitting of the Australian Open final. They traded games, Federer won the 1st and 3rd and Nadal took the 2nd and 4th before Federer sealed the victory winning 6-4 in the 5th set.

He had finally made it, he had sealed his 18th Grand Slam victory, which he had sought for 5 years.

After the match Federer said:

“Tennis is a tough sport,” said Federer. “There are no draws. If there were I would have been happy to accept one and share it with Rafa.

“Everybody says they work very hard – I do the same – but I try not to shout about it. I’d like to thank my team. It’s been a different last six months. I didn’t think I’d make it but here I am.”

Federer now leads in Grand Slam wins with 18, while the American Pete Sampras and Rafael Nadal both have 14 wins each.