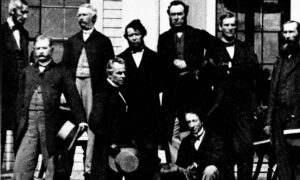 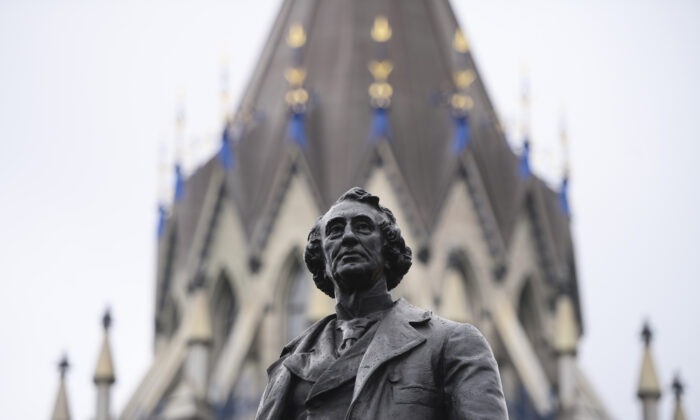 A statue of Canada’s first prime minister Sir John A. Macdonald on Parliament Hill in Ottawa on June 3, 2021. (The Canadian Press/Sean Kilpatrick)
Canada

The federal government has removed the biography page of Canada’s founding Prime Minister, Sir John A. Macdonald from the official government of Canada website.

According to The Toronto Star, Macdonald’s page was pulled from the Library and Archives Canada website over the weekend, showing only an “error 404” message on Monday. Currently, no search results for his name are available on the website.

The Star reported last October that Macdonald’s biography page on the website did not mention his role in establishing the Canadian Indian residential school system.

Macdonald’s removal comes after members of the Tk’emlúps te Secwépemc First Nation community last month released a statement (pdf) announcing the discovery of the remains of 215 indigenous children at the location of a former residential school in Kamloops, British Columbia.

The discovery has added momentum to protests against Macdonald, whose statues have been repeatedly targeted for attacks and vandalism in recent years across a number of jurisdictions in Canada.

Most recently, the city council of Charlottetown, Prince Edward Island, voted on June 1 to permanently remove a statue of Macdonald.

Beside Macdonald, another Canadian historic figure has also become a rallying point for protests—Egerton Ryerson, a prominent contributor to the creation of the residential school system.

On Sunday, a statue of Ryerson statue at the Ryerson University in Toronto was toppled and beheaded by demonstrators an hour after the university announced its decision to keep Ryerson as its namesake. University President Mohamed Lachemi said the statue will not be replaced.

A number of voices go further to refresh calls to cancel Canada Day this year, with the hashtag #cancelcanadaday circulating on social media. Idle No More, an Indigenous rights advocacy group, have also called on Canadians to “disrupt” the celebration of Canada Day in a nation-wide social movement on July 1.

Canada Day is a federal holiday celebrating the anniversary of the Canadian confederation, which took place on July 1, 1867.

Some have rejected calls for the cancellation of the holiday, calling it “cancel culture.”

Alberta’s Premier Jason Kenney last week said Canadians should consider the complex social context those historical figures were under at the time when policies such as residential schools were introduced.

“If we want to get into cancelling every figure in our history, who took positions on issues at the time that we now judge harshly, and rightly in historical retrospect, if that’s the new standard, then I think almost the entire founding leadership of our country gets cancelled,” he said.