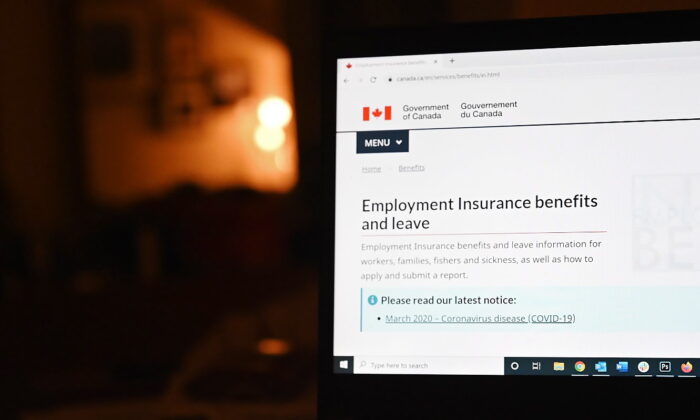 The employment insurance section of the Government of Canada website is shown on a laptop in Toronto on April 4, 2020. (The Canadian Press/Jesse Johnston)
Canada

A federal tribunal has ruled in favour of a Toronto man who was denied his Employment Insurance (EI) benefits after losing his job for not getting vaccinated for COVID-19.

In a decision released on Sept. 12, the Social Security Tribunal of Canada reversed the denial of EI benefits to Timothy Conlon, a delivery driver who was fired last July for refusing to comply with his employer’s mandatory COVID-19 vaccination requirement.

Upon his termination, Conlon applied for EI but was denied by the Canada Employment Insurance Commission (CEIC), which claimed he was not eligible for the benefits despite having paid into them for years.

In her decision, tribunal member Solage Losier said that although the CEIC had ruled Conlon was not entitled to receive EI benefits “due to his own misconduct,” the commission did not prove its claim that misconduct had taken place.

“I cannot find that the Claimant’s conduct was willful misconduct in this case,” wrote Losier.

“He did not consciously, deliberately, or intentionally breach the employer’s verbal direction. Also, his conduct was not reckless. He simply was not provided with enough time to comply and could not have known he would be dismissed for his conduct.”

On Aug. 31, Conlon testified before the tribunal that his former employer had verbally told him on July 7, 2021, that he needed to be vaccinated in two days or he would have to quit. Conlon declined to comply with either option and was fired on July 9, 2021.

During the hearing, Conlon expressed disagreement with the CEIC’s decision, arguing that he was dismissed from his job two days after he was told about the policy, with no fault on his part.

“[Conlon] argues that there were no complaints about his work performance, no reprimands about his conduct and [that the] employer failed to reasonably accommodate him,” Losier wrote.

The Justice Centre for Constitutional Freedoms (JCCF), which represents Conlon and others challenging the denial of their EI benefits due to vaccination, says Conlon had valid reasons for not acceding to his employer’s demands.

“Mr. Conlon expressed concerns about his existing high blood pressure and the reports of some individuals getting blood clots after taking the shots,” said JCCF in a press release on Sept. 16.

The legal advocacy organization said Conlon, whose job involved the direct delivery of personal care items to homes, would not have posed a substantial risk to the public since he did not interact directly with customers when leaving items at their doors.

The employer, however, deemed Conlon “too dangerous to face customers,” Losier said in her ruling.

Conlon’s employer also denied firing him, saying he was put on an extended “Infectious Disease Emergency Leave” (IDEL) until July 2022. Conlon testified he had not taken an IDEL leave from work as he didn’t meet any of the requirements.

“For example, he had not contracted covid19, he was not experiencing a side effect from the covid19 vaccination and he was not in quarantine or isolation,” Losier wrote.

Losier noted that Conlon never received any written documentation either before or following the employer’s verbal direction that he be vaccinated for COVID-19.

“The employer’s ROE [Record of Employment] says he took an IDEL leave, but that was issued approximately two months after he stopped working,” she said.

Losier found that Conlon did not meet the criteria for willful misconduct claimed by the CEIC. She ruled that his conduct was “not willful, conscious or deliberate misconduct.”

“[Conlon] explained that he had medical reasons that may have permitted him to be exempt, but never had a chance to make a request to the employer and did not know if there was a formal policy in place,” she wrote.

The Justice Centre says as a result of the termination and denial of EI, Conlon was thrown into a financial crisis where he had to rely on friends to help cover his purchase of a transit pass and payments for his shared rental.

“Mr. Conlon’s experience is not unique,” the JCCF said in the release. “Such decisions echo comments made by Minister Carla Qualtrough, who stated that those fired for refusing vaccination shouldn’t be eligible for EI benefits.”

Qualtrough said on CBC’s “Power & Politics” program on Oct. 21, 2021: “It’s a condition of employment that hasn’t been met, and the employer choosing to terminate someone for that reason would make that person ineligible for EI.”