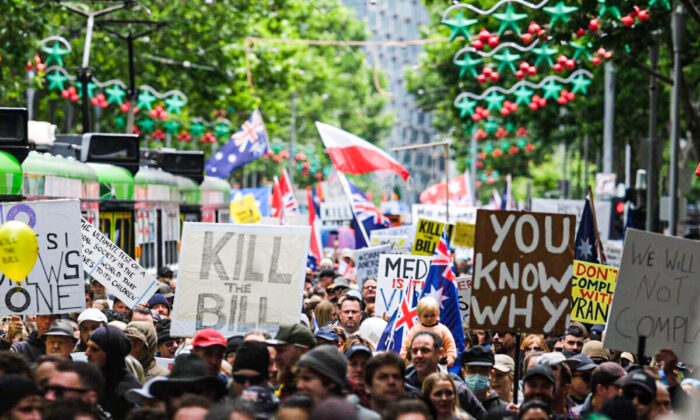 Federal Treasurer Josh Frydenberg is among a growing number of federal MPs who are voicing their concerns over Victorian Premier Daniel Andrews proposed pandemic legislation that will grant the state’s premier and health minister unprecedented powers to “rule by decree.”

“I don’t agree with Daniel Andrews Pandemic Bill. It’s overreach & has rightly been condemned,” Frydenberg said in a tweet.

Frydenberg also called out protestors  for depicting the Victorian Premier as a Nazi, saying: “Placards depicting the Premier in a Nazi uniform is offensive & wrong.”

I don’t agree with Daniel Andrews Pandemic Bill. It’s overreach & has rightly been condemned. But placards depicting the Premier in Nazi uniform is offensive & wrong.

It shows a lack of understanding of history. It fuels hatred. It’s dangerous & has no place in public debate. pic.twitter.com/9QN5rj5hym

This follows a protest on Nov. 13 that saw thousands of Australians march peacefully through the streets of Melbourne CBD towards the state Parliament House where chants of “Kill the Bill” and “Sack Dan Andrews” could be heard, and signs criticising Daniel Andrews and pandemic legislation were seen.

“We are in the face of tyranny and corruption,” Kelly told the protestors. “I have decided to take a stand like many of you have here today—I hear you.”

“We are no longer governed for the people or by the people. We’re being governed by insane medical bureaucrats,” he said, adding that mandatory vaccinations are an “abuse of human rights.”

Kelly’s comments come as Victorian Premier Daniel Andrews seeks to push the Bill through the upper house this week.

Under the proposed “Public Health and Wellbeing (Pandemic Management) Bill 2021 (pdf),” the premier can declare a pandemic and extend a declared state of emergency for three months “indefinitely.”

Authorised officers can also enter a premise without a warrant and arrest a person deemed to be a “serious risk to public health.”

It would also give the state government the powers to restrict movement, ban public gatherings, close businesses or order quarantine requirements.

“The Minister will also be able to issue a pandemic order to a specific classification of person or group depending on their location, participation at an event or activity, or a particular characteristic such as age, vaccination status, residence, occupation or living arrangements,” according to a government media statement.

Research published by the Institute of Public Affairs (IPA) on Nov. 15 has revealed how the proposed bill is “fundamentally antithetical to parliamentary democracy.”

The report (pdf) identified six ways in which the bill violates democratic principles, including granting powers for the Victorian health minister to use “draconian powers against people based on their religion, political beliefs, or ethnic background,” powers for the authorised officers to “detain people without trial indefinitely which abrogates the ancient right of habeas corpus,” and it prevents the powers exercised by the health minister and authorised officers from being challenged in the courts.

“All these powers would be exercised without the control or scrutiny of the Parliament or the Courts,” the report states.

“This unprecedented grab for dictatorial powers by the Andrews’ government has no place in a free country like Australia,” said Morgan Begg, Director of the Legal Rights Program at the Institute of Public Affairs.

However, the Victorian Health Minister Martin Foley has defended the bill telling ABC RN Breakfast on Nov. 15 that among “all of the best models” the state government has seen, the pandemic legislation “makes the public health advice the heart of the decision.”

“But what it also does is brings the Victorian pandemic response into line with just about everywhere else and makes the elected members of parliament accountable for those decisions.”

When asked if politicians can ignore the advice of Chief Health Officer, Foley has “yes, but that will be highly unlikely.”

“But of course, what the final decisions rest with is the elected accountable members of parliament, the ministers of the day to the parliament and to the people of Victoria,” Foley said.

Under the proposed bill, Victoria’s Chief Health Officer would no longer have the power to make special orders, with that power instead transferred to the health minister.

Meanwhile, four changes could be made to the proposed bill, including making it easier to appeal detention orders and boosting parliamentary oversight, reported Sky News.

Opposition Liberal Leader Matthew Guy said on Nov. 14 that the pandemic bill would be “the first thing we rip up” if elected next year.

The bill will now require the support of three key crossbenchers—the Greens’ Samantha Ratnam, Animal Justice Party’s Andy Meddick, and Reason Party leader Fiona Patten. All three have indicated their support of the bill subject to some amendments.