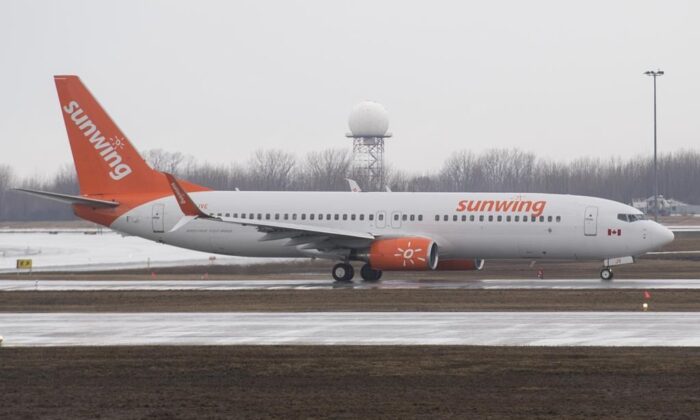 Videos of the Dec. 30 flight shared on social media appear to show passengers not wearing masks as they gather in close proximity, singing and dancing in the aisle and on seats.

In one video, a large bottle of vodka appears to be passed among passengers, and later a woman appears to be smoking an electronic cigarette on the plane.

According to reports, the plane had been chartered and some of the passengers were cast members from Quebec reality television shows.

“I have asked Transport Canada to investigate the matter,” Alghabra wrote in a post on Twitter. “We must take the risks of COVID seriously!”

The statement said Transport Canada has contacted the airline, and says passengers who violated the department’s regulations could face fines of up to $5,000 per offence.

Rena Kisfalvi, president of the Canadian Union of Public Employees local that represents about 1,000 Sunwing flight attendants, also called the passengers’ behaviour “unacceptable” and expressed sympathy for the crew on the Cancun flight.

“There’s a point where if you lose the control, you can’t get it back sometimes,” she said in a phone interview.

Compliance with mask rules has been a “massive issue” over the past year that has “caused a tremendous amount of aggressive behaviour” from passengers toward cabin crews, she said.

“I’m not sure where Transport Canada is on this. Why haven’t you done more?” Kisfalvi asked, at around the same time Alghabra put out his Twitter post.

“These passengers that are not complying, are they being charged? Are they being denied boarding in the future? Are they placed on a no-fly list? Maybe we as a government have to take that step to show the travelling public, `Look, we mean business here.'”

Sunwing said in an emailed statement that passenger behaviour on the private charter flight “was unruly and contravened several Canadian Aviation Regulations as well as public health regulations.” It said its security department investigated, and the company reported the incident to Transport Canada.

The airline said it provided the tour group leader conditions to ensure the safety of passengers and crew on the return flight to Montreal, scheduled for Wednesday.

“Unfortunately, the group did not accept all of the terms. As a result of our ongoing investigation and the group’s refusal to accept all terms of carriage, we have made the decision to cancel the return flight,” the Sunwing statement said. “We regret any inconvenience to the passengers.”

On Instagram, 111 Private Club took credit for the flight, describing the all-inclusive New Year’s trip to Mexico it organized as the “best event of the year.” It posted a screenshot of a newspaper article about the flight with the caption, “we made the news.”

James William Awad, who operates 111 Private Club, did not respond to a request for comment sent through Facebook. A message sent to the 111 Private Club account also received no reply.

The statement from Alghabra, Duclos and Mendicino noted that the Public Health Agency of Canada and partners coordinate the processing of travellers returning to Canada, and that travellers suspected of non-compliance are referred to PHAC.

It stated that questionable or fraudulent documents will be retained, and warned that giving false information to a Canadian government official and could result in fines of up to $750,000, six months in jail, or both.

If endangering the lives of others and causing harm, the statement warns a traveller could be subject to up to three years in prison and/or up to $1 million in fines.

“The Government of Canada continues to advise all Canadians to avoid non-essential travel outside of Canada at this time,” the statement concluded.

“We continue to work closely with airlines, airports, and our other transportation partners to safeguard the health of Canadians and Canada’s air transportation system.”

By Jacob Serebrin and Christopher Reynolds