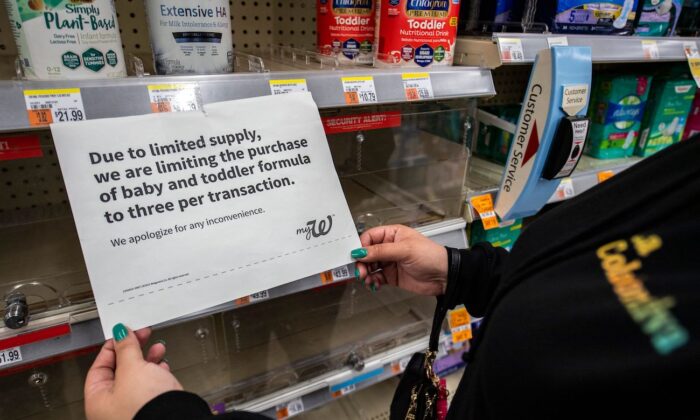 Limited supply of baby formula at a convenience store in Chelsea, Mass., on May 20, 2022. (Joseph Prezioso/AFP via Getty Images)
US News

The Federal Trade Commission (FTC) on Tuesday launched an inquiry into the ongoing shortage of baby formula in the United States.

In a statement, the FTC said the inquiry seeks information on the “nature and prevalence of any deceptive, fraudulent, or otherwise unfair business practices aimed at taking advantage of families during this shortage.”

The inquiry also seeks to find out what factors “have led to concentration in the infant formula market and the fragility of the supply chains for these crucial products,” the FTC said.

Press coverage of the ongoing baby formula shortage increased in recent months after Abbott Laboratories, a top U.S. supplier of baby formula, announced a recall of several lines of powdered formula on Feb. 17, and voluntarily shut down a key plant in Sturgis, Michigan, on the same day. The plant produces up to one-quarter of the country’s baby formula.

Abbott Laboratories stated on May 16 that it has reached an agreement with the U.S. Food and Drug Administration (FDA) to reopen the plant. The plant is expected to reopen within two weeks. Abbott noted that there would be about six to eight weeks from the start of production to when the baby formula products reach supermarket shelves across the country.

The FTC said on Tuesday it will examine mergers and acquisitions in the infant formula market “to better understand current concentration, how it came to be, and how that should inform future merger review.”

In a statement, FTC Chair Lina Khan said the ongoing baby formula shortage is causing “enormous anxiety, fear, and financial burden for American families” and said she is committed to investigating and enforcing the law against anyone who has deceived, defrauded, or scammed desperate families.

She said the FTC is also investigating “whether manufacturers or distributors are engaging in unlawful discrimination that may be limiting remaining infant formula supplies at smaller retailers.”

The FTC is seeking public input on the matter and is encouraging the public to comment on the public docket on the following topics:

The FTC specified that comments should be submitted to regulations.gov and must be received no later than Friday, June 24, 2022, by 11:59 pm ET.

“The FTC is launching a public inquiry to identify the factors that contributed to the shortage or hampered our ability to respond to it,” Khan said. “Learning from this experience can help determine how we can minimize the risk of similar shortages in the markets for other life-sustaining products.”

The FTC will be working with the United States Department of Agriculture (USDA) which administers WIC, to analyze the results of the public inquiry and see whether any policy changes may be needed to prevent future shortages.

Prior to the February temporary closure of the Abbott plant, shortages of baby formula were noted amid supply chain pressures triggered by the COVID-19 pandemic. Secretary of Health and Human Services Xavier Becerra said in an interview with CNN on May 16 that he had been alerted to the baby formula shortage situation by the FDA since 2021.

“From everything I’ve known, the FDA has kept me apprised of this from last year,” Becerra said, referring to the ongoing baby formula shortage. “We have been moving as quickly as we can.”

President Joe Biden’s administration has sought to relieve the shortage by importing emergency supplies from Europe, the first of which arrived on Sunday. Biden had said he was invoking the Cold War-era Defense Production Act to help boost supplies.