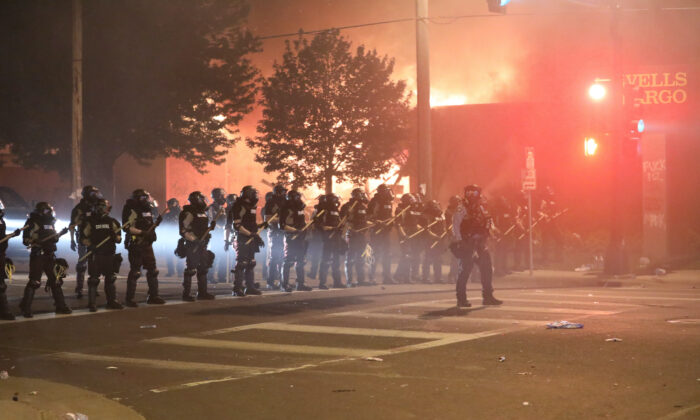 MINNEAPOLIS—Federal, state, and local authorities have observed a changing pattern of the protests in Minneapolis in response to the death of George Floyd and are concerned that persons from outside the state actively participated and agitated amid the protests in recent days.

Minneapolis Mayor Jacob Frey said that the “dynamic [of the protest] has changed over the last several days.”

In St. Paul, Minnesota, every person arrested on the night of May 29 was from out of state, Mayor Melvin Carter III told reporters. He said local activists confirmed that the violent protesters aren’t from Minneapolis.

80% of the RIOTERS in Minneapolis last night were from OUT OF STATE. They are harming businesses (especially African American small businesses), homes, and the community of good, hardworking Minneapolis residents who want peace, equality, and to provide for their families.

Attorney General William Barr warned on May 30 that “it is a federal crime to cross state lines or to use interstate facilities to incite or participate in violent rioting.

“Groups of outside radicals and agitators are exploiting the situation to pursue their own separate and violent agenda,” he said. “We will enforce these laws.”

Growing Number of Protesters Have Agenda

Thousands of protesters broke an 8 p.m. curfew imposed by Minnesota Gov. Tim Walz, storming downtown areas in the twin cities area, with some looting and setting fire to stores.

While a mix of ethnicities appeared to join the protest, and people of all ages were present, the ages skewed mostly younger.

The atmosphere was chaotic, smoky, and loud and a growing number of protesters seemed to have an agenda other than justice for Floyd. Others were rioting, looting, and burning stores nearby.

Many of the signs at the protest were the same and had “Party of Socialism and Liberation” written along the bottom under the slogan, “Jail All racist Killer Cops!”

Some people were handing out water and snacks, and later on, others were helping those who were affected by tear gas.

The death of Floyd, a black man in Minneapolis who died earlier this week while in the custody of Minneapolis police, has caused a national uproar.

Protests exploded in dozens of cities around the nation, including Minneapolis, Washington, New York, Atlanta, Detroit, and Louisville, on May 29 with occasional looting, arson, and vandalizing.

A widely circulated video showed Floyd lying down and handcuffed as a police officer was seen kneeling on the man’s neck for nearly nine minutes. The footage showed Floyd telling officers that he “can’t breathe” before his body went motionless. According to a Minneapolis Fire Department report (pdf), Floyd was unresponsive and “pulseless” when he was being transported into an ambulance by paramedics from the site of his arrest to the hospital.

The police officer who was seen kneeling on the man’s neck, Derek Chauvin, was fired on May 25, along with three other officers. He was charged with third-degree murder and second-degree manslaughter on May 29.

During the May 29 night protests in Minneapolis, some Black Lives Matter activists from outside the Twin Cities region were seen to have participated.

Hawk Newsome, a Black Lives Matter leader in the Greater New York area, flew in along with other group members from New York on May 29 following Floyd’s death on May 25.

Newsome used a megaphone to shout slogans, such as “down with the capitalist pigs,” during a protest outside the 5th Precinct of the Minneapolis Police Department.

“I want to point something out to y’all, right. … Do you ever notice when we march, half of the group is a little bit scared and the police are all over you?” said Newsome. “But when you’re out here with thousands of fearless [expletive], we’re in control. What do they do? They back up and run. And that’s why we say, ‘Back up, back up, we want freedom, freedom.’”

The Black Lives Matters activists weren’t observed as being part of the violent crowds, although it was difficult to positively identify anyone.

Venus Upadhayaya and Janita Kan contributed to the report.