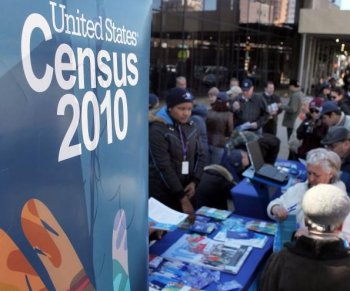 The Census Bureau released figures for 2009 and found the total federal spending last year reached $3.2 trillion, which is the equivalent to $10,548 per person living in the United States. (Spencer Platt/Getty Images)
US

Natalie Gee
View profile
Follow
biggersmaller
Print
Total federal spending in fiscal year 2009 reached $3.2 trillion, which is the equivalent to $10,548 per person living in the United States. It represents a 16 percent annual increase, the largest since the Census Bureau began measuring federal spending in 1983. The bureau released figures for 2009 spending on Aug. 31.

The increase can be partly explained by the American Recovery and Reinvestment Act (ARRA) of 2009. New figures from the Consolidated Federal Funds Report show that nearly half, 45.7 percent, of all expenses went into Medicare, Medicaid and Social Security, totaling $1.5 trillion, of which $709.7 billion went to Social Security.

A companion report also released today -Federal Aid to States: 2009- shows federal grants to state and local governments. These two reports do not include interest paid on the federal debt and foreign aid, and "although federal expenditure and obligation totals for fiscal year 2009 in these reports include money from the ARRA, specific dollar amounts are not identifiable for all programs."

More than three quarters of the $744.1 billion in grants went to three federal departments: Health and Human Services, Education and Transportation.

Salaries and wages for federal employees, representing $299.4 billion, went to Department of Defense payrolls, 45.8 percent, then to various civilian payrolls..

Retirement and disability payments amount to $881.1 billion. "Other direct payments" include housing assistance, unemployment compensation and Medicare) were worth $762.9 billion.

The Consolidated Federal Funds Report also points to an increase in unemployment compensation of more than 100 percent in forty states.