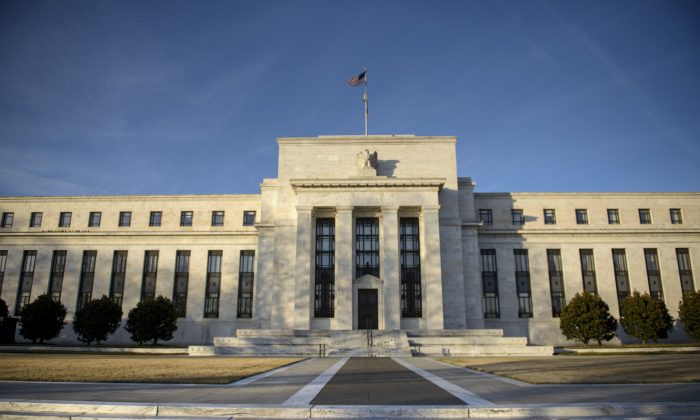 A view of the Federal Reserve in Washington, D.C., on Jan. 13, 2015. (Brendan Smialowski/AFP/Getty Images)
Business & Economy

NEW YORK—The recent slower pace of job creation likely takes an interest rate hike off the table when Federal Reserve policymakers meet in October but a move is still in play for December.

In August and September, payroll gains averaged only 139,000. But that likely had much to do with a recent surge in worker productivity. Job gains have softened several times during the recovery only to rebound, and the long-term prospects for economic growth remain strong.

Consumer activity appears quite robust. Third-quarter spending will likely register a 3 to 4 percent annual gain, and household balance sheets are in their best shape since the recovery began.

Hampering growth is the stronger dollar and fears the Chinese government will further mismanage the world’s second largest economy.

For years, Chinese growth was juiced by a combination of mercurial protectionism and fraud. Chinese manufacturing and exports were advanced far more than lower labor costs warranted through a cheap currency made possible by a combination of People’s Bank of China printing yuan to buy dollars and pervasive limits on inward foreign investment and capital flows. An endless flow of bank loans, supported by dishonest bookkeeping, permitted many Chinese companies to keep exporting even as they piled up losses.

Still, it is important to recognize that while virtually all nations’ exports to China are slowing, its exports for two decades slowed growth for the United States and much of the EU by flooding stores with artificially cheap goods and shuttering many of their factories.

While the millions of manufacturing jobs lost in America and Europe—to advance the fraud that Beijing’s economists had unlocked the secret of endless state managed growth—will not likely be regained, the U.S. economy, thanks to technological prowess and strong legal protections, should again emerge as the first choice for global investors.

Importantly, Beijing technocrats will be less able to dupe Western companies into transferring technology to Chinese joint venture partners with the promise of markets growing at warp speed. Instead, they will have to liberalize investment policies either explicitly or by becoming more responsive in negotiations with individual companies to access foreign know-how the country needs to recover.

A Fed interest rate increase won’t harm growth, and the Fed is still likely to begin raising rates at its December meeting or early next year.

Over the next two years, the U.S. economy will likely expand at 2.5 percent to 2.8 percent, but in the years beyond the pace could be much stronger if a new president got behind tax reform and fixed the distortions imposed by “Obamacare” and excessive regulation in the manufacturing and financial sectors.

As for U.S. monetary policy, boosting the federal funds rate (the banks overnight borrowing rate) from near zero to perhaps 2.5 percent by the end of 2017 won’t much affect all this.

Central banks in Europe, Japan, and China will likely adjust their policies to substantially maintain current interest rate spreads between U.S. and major foreign bond markets, and the value of the dollar against their currencies, and hence U.S. exports and import competitiveness and growth, won’t be much affected.

Chinese Yuan Global Now No. 4 but Far From No. 1

Overall, a Fed interest rate increase won’t harm growth, and the Fed is still likely to begin raising rates at its December meeting or early next year.