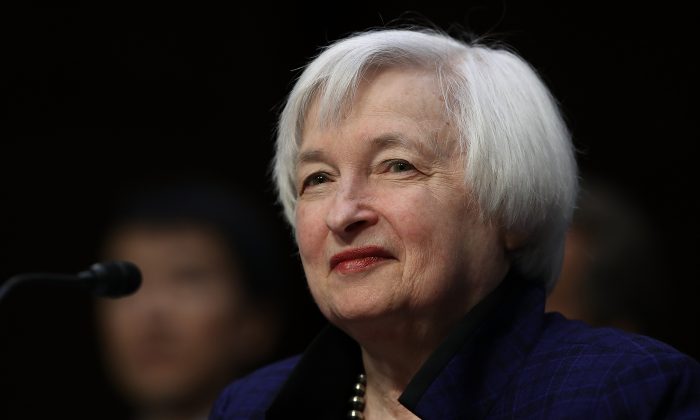 WASHINGTON—The Federal Reserve is raising a key interest rate for the first time in a year, reflecting a resilient U.S. economy and expectations of higher inflation. The move will mean modestly higher rates on some loans.

The Fed signaled in a statement Wednesday that additional rate increases will likely be made slowly as the economy improves and inflation edges closer to the Fed’s 2 percent target.

The central bank is increasing its benchmark rate by a quarter-point to a still-low range of 0.5 percent to 0.75 percent. The Fed last raised the rate in December 2015 from a record low near zero set during the 2008 financial crisis.

President-elect Donald Trump’s plans for tax cuts and infrastructure spending have led investors to expect that inflation will pick up in coming months.

The economy, after growing at an anemic annual rate of 1.1 percent in the first half of this year, accelerated to a 3.2 percent pace in the July-September quarter. That pickup has lifted hopes that the economy will keep rising, fueled by steady hiring gains.

In the month since Trump’s victory, investors have sent stock prices surging to record highs and driven up bond yields. The markets have calculated that Republican control of Congress will enable Trump to cut taxes, ease regulations and accelerate infrastructure spending—and that higher economic growth, inflation and corporate profits will result.

Trump’s Policies Would Lead to Inflation

The Fed’s action Wednesday should have little effect on mortgages or auto and student loans. The Fed doesn’t directly affect those rates, at least not in the short run. But rates on some other loans—notably credit cards, home equity loans and adjustable-rate mortgages—will likely rise soon, though only modestly. Those rates are based on benchmarks like banks’ prime rate, which moves in tandem with the Fed’s key rate.

Mortgage rates have been surging since Trump’s election victory last month on expectations that his economic program will accelerate economic growth and inflation.

Some Fed watchers expect faster growth to lead the central bank to shift its focus from trying to energize the economy to considering ways to counter the risk of excessive inflation. On that assumption, some are revising their forecasts for Fed rate hikes in 2017.

Before Trump’s victory, the consensus view of economists was for two Fed rate increases next year. Now, some say they foresee three or possibly as many as four. Others think the Fed will be hesitant to step up the pace of rate hikes. For one thing, Trump’s economic program still must win congressional approval and could undergo significant change along the way.

Last month after Trump’s election, Yellen told a congressional committee that Fed officials would be monitoring Congress’ actions and “updating our economic outlook as the policy landscape becomes clearer.”

Other Fed officials have endorsed that wait-and-see approach.