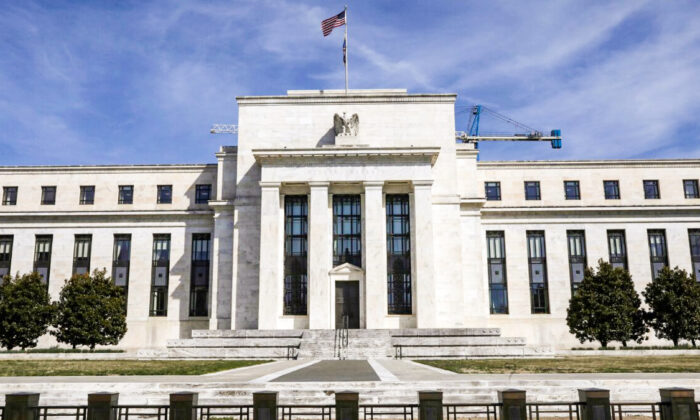 The Federal Reserve Board Building on Constitution Avenue in Washington on March 27, 2019. (Brendan McDermid/Reuters)
By Jack Phillips

While employment increased at a modest to moderate rate in recent weeks, the Fed’s so-called Beige Book noted that the U.S. economy has been “dampened by a low supply of workers,” partially due to vaccine mandates.

“Transportation and technology firms saw particularly low labor supply, while many retail, hospitality, and manufacturing firms cut hours or production because they did not have enough workers,” its report summary said. “Firms reported high turnover, as workers left for other jobs or retired. Child-care issues and vaccine mandates were widely cited as contributing to the problem, along with COVID-related absences.”

“Most employers shared that they would like to implement COVID-19 vaccine mandates but were concerned about losing employees,” the Atlanta Fed said in the report. “Worries about employee mental health, burnout, safety, and vaccine mandates impacting company culture were mentioned.”

Some manufacturing businesses reported a “higher labor turnover that some attributed to the lagged effects of the pandemic” but some said the quits were “in response to vaccine mandates,” the Boston Fed also said in its report.

Some 4.3 million workers quit their jobs in August, according to the most updated data from the Labor Department. That figure represents an all-time high since recordkeeping began in December 2000.

On Sept. 9, Biden announced that private businesses with 100 or more employees would have to either mandate vaccinations or have workers submit to weekly COVID-19 testing, as well as mandates for federal contractors, federal workers, and healthcare staff who are employed at Medicaid- or Medicare-funded facilities.

As a result several large corporations, including most major airlines and healthcare companies, began to implement vaccine requirements in recent weeks.

Although Biden made the announcement in early September that he will direct the Occupational Safety and Health Administration to come up with an emergency rule on COVID-19 vaccines, the agency submitted its mandate for private employers on Oct. 12. So far, the White House has not provided a clear timeline on when the rule could be implemented or what penalties businesses could face.