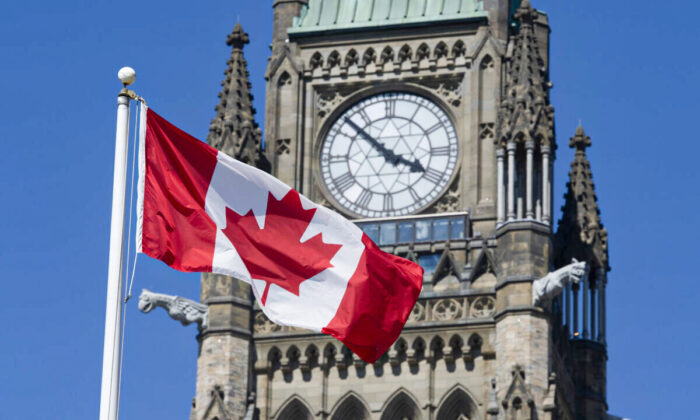 The Canadian flag flies near the Peace Tower on Parliament Hill in Ottawa on June 17, 2020. (Adrian Wyld/The Canadian Press)
Canada

Canada’s public servants are having trouble telling their political masters the truth about what they think regarding topics that are politically sensitive or airing opinions that are unpopular, a new study says.

Released on May 11, the study, titled “Top of Mind,” examines the fears and hopes of public servants at all levels of government across the country. It was conducted by two think tanks, the Institute of Governance and the Brian Mulroney Institute of Government, based on interviews with 42 senior leaders and a survey of 2,353 employees in the same organizations in the public sector.

“The main concerns revolved around the independence of the public service, the effectiveness of parliamentary committees, the loss and/or reduction of policy advice capacity, the role of political staff, the ability to provide ‘fearless’ advice to political leaders, and the politicization of issues and debates.”

The public service ­ethos—­fearless advice and loyal implementation—has become increasingly difficult for public servants to uphold as their political bosses want less advice, and the implementation to be done on their terms, the study noted.

“‘Speaking truth to power,’ though important, seems less achievable to many participants,”  the study said.

“To this point, participants referenced fewer safe spaces for senior public executives to provide analysis or options that are unpopular or not sufficiently in tune with their government’s (political) position.”

The study added that public service has “lost” an element of independence, and employees are now expected to deliver on platform commitments rather than offering advice based on “feasibility of the commitment” or alternative ways to achieve the goal of the commitment.

Participants also told the think tanks that the relationship is impeded by the “overpoliticization of policymaking and choices, and the lack of opportunity to constructively challenge political direction.”

In addition, the study said there was a sense among participants that political staff have overextended their role and conflicted with the deputy ministers’ responsibilities. Deputy ministers serve as managers of government departments, directing the administration of finance and human resources under the leadership of ministers.

“The public service is beaten down by the need to be responsible politically,” one participant said, according to the study.

The study made several recommendations in an attempt to improve the relationship between bureaucrats and their political bosses.

One proposal is for a joint Senate-Commons committee to review the Federal Accountability Act introduced by the Harper government in April 2006 that aimed to provide conflict of interest rules; restrictions on election financing; and measures respecting administrative transparency, oversight, and accountability.

“[It is] to understand if its compliance and reporting requirements have had unintended consequences either in practice or in culture affecting ‘fearless advice’ or innovation,” the study said.

“Whether real or perceived, the belief that senior public sector leaders are unsupported in providing ‘fearless’ advice presents a problem for good governance. The potential ‘cascading effect’ on assistant deputy ministers (and beyond) is unclear and perhaps worthy of further study.”