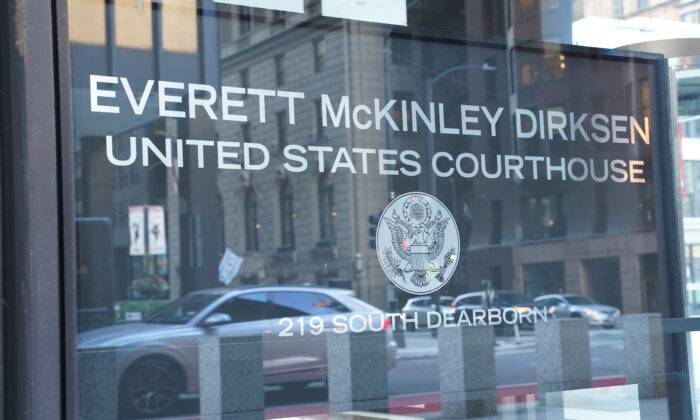 CHICAGO—During the first week of a months-long Chicago gang trial, federal prosecutors laid before jurors evidence of what they call “brazen violent murders” committed by the notorious Four Corner Hustlers, a street gang that had terrorized the West Side of Chicago for decades.

Pictures of lifeless bodies were shown on the screen, blood-stained shirts and pants were brought to the courtroom, and bullets that ended lives were displayed at the witness stand.

The federal judge presiding over the case, Thomas Durkin, time and again reminded the jurors not to be swayed by the horrific pictures, nor to forget the defendant is presumed innocent throughout the trial. The burden is always on the prosecutors, he said, to prove charges beyond a reasonable doubt through evidence.

Scores of eyewitnesses, detectives, forensic investigators, medical examiners, and a former state attorney spoke of what they knew about the murders of Carlos Caldwell, Maximillion McDaniel, and Levar Smith. Evidence for three more murders will be introduced in coming weeks.

Labar Spann, the lone defender, listened on in a wheelchair in the courtroom behind the defense table, occasionally covering his face with a white blanket.

Spann, an alleged leader of the Four Corner Hustlers, is accused of orchestrating more than six murders and aiding in other crimes, such as extortions and drug dealing, as part of a sweeping racketeering conspiracy charge. He could face a life sentence if found guilty by the jury.

One witness, Ezekiel McDaniel, told jurors that Spann was responsible for the murder of his brother Maximillion; Spann told him about it himself about 20 years ago, McDaniel said at the witness stand.

In 2001, when Ezekiel was incarcerated in Cook County, he met Spann during a jail visit. Spann allegedly said to him, “Who do you think killed your brother? We did it. Don’t work with the state and end up dead like your brother.”

His brother, Maximillion, was killed by a single bullet to the head in July 2000, after cooperating with prosecutors and testifying against Spann’s father, Willie Jones, in a murder case.

The credibility of Ezekiel’s testimony, along with those of other witnesses, is left to the jurors to decide. Judge Durkin, at the outset of the trial, handed jurors a few tools to aid their determinations, including examining a witness’s intelligence, access to evidence, memory, and consistency.

In the case of Ezekiel, a defense attorney pointed out that Ezekiel had something to gain (reduced sentences) when he first testified against Spann; Ezekiel had reached out to state attorneys about Spann’s alleged involvement in his brother’s murder in the early 2000s.

In response, a federal prosecutor tried to repair Ezekiel’s credibility by reminding the jurors that he is now out of prison and has nothing to gain from his testimony.

Prior to presenting the murder evidence, the federal prosecutors laid before the jurors the origins of the Four Corner Hustlers through their expert witness, Jason Brown. Brown, a 24-year veteran at Chicago Police Department, had worked years on long-term investigations into gangs on the West Side of Chicago.

The Four Corner Hustlers were founded by Walter Wheat and Freddy Gauge in the late 1960s as an offshoot from one of the largest and oldest Chicago street gangs called Vice Lords.

The initial purpose of the Four Corner Hustlers was to protect the safety of residents within four corners of a small territory in the West Garfield Park neighborhood on the West Side.

However, as the crack cocaine epidemic engulfed black communities in the early 1980s, the gang was gradually repurposed into a money-making enterprise that acquired and distributed illegal drugs, often resorting to violence to protect its turf and other interests.

Since the 1970s, federal prosecutors have used the Racketeer Influenced and Corrupt Organizations (RICO) Act to go after behind-the-scenes gang bosses and squash the mafia and street gangs. The last major federal RICO trial in Chicago dates back to 2016 when a jury convicted six Hobo gang leaders, four of whom were sentenced to life in prison.

The federal prosecutors are expected to present about 140 witnesses during the Spann trial along with other evidence. The trial takes place four days a week and is expected to last until late November.