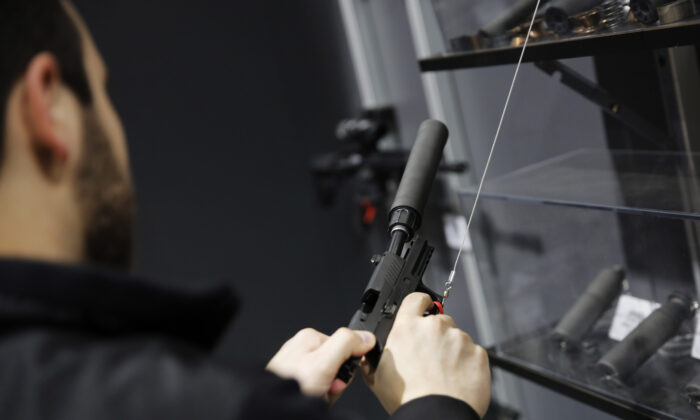 A visitors pulls the slide of a pistol with a silencer at a gun displays at a National Rifle Association outdoor sports trade show in Harrisburg, Pa., on Feb. 10, 2017. (Dominick Reuter/AFP via Getty Images)
US News

A federal effort dubbed Operation Silent Night has seized 42,888 firearm silencers illegally smuggled into the United States from China, according to a report released by the U.S. Immigration and Customs Enforcement (ICE).

The report (pdf) states that a total of 4,868 firearms were also confiscated and 204 criminals were arrested as of March. The operation was launched in 2019 to keep dangerous weapon components off the streets.

“The operation is led by the HSI’s [Homeland Security Investigations] National Targeting Center-Investigations, and targets the manufacturer, supply chain, and end-users of these illegal weapon components,” the reports states.

Stacey Whitehead, an inspector with the U.S. Postal Inspection Service, said that while shipments of illegal gun silencers from China continue, the threat has evolved because of the supply of foreign silencers being delayed amid the crackdown.

Officials are on the lookout for unlicensed U.S. manufacturers who are replacing Chinese sellers threatened by the federal operation, as well as 3D-printed silencers, Whitehead said.

Silencers are tubes that attach to the barrel of a firearm and contain baffles that reduce the weapon’s recoil and can quiet a gunshot.

According to a 10-year study published in 2007 by the Western Criminology Review, silencers are rarely used in crimes. Researchers estimated that silencers were involved in 30 to 40 of the 75,000 federal criminal cases filed each year. The study found only two federal cases involving a silencer used in murders.