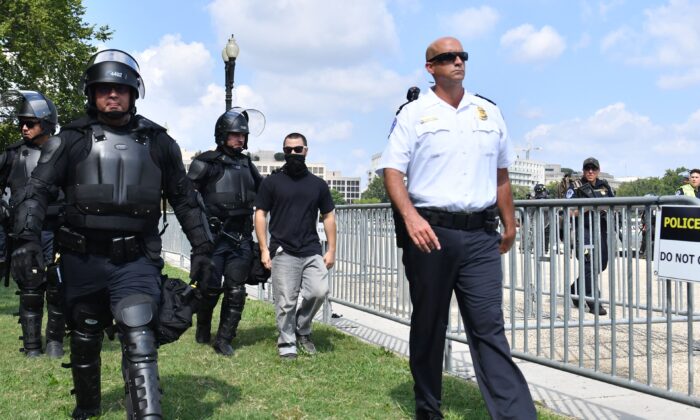 A man later identified as a Customs and Border Protection Officer (C) is escorted by U.S. Capitol Police officers away from a rally in Washington on Sept. 18, 2021. (Eric Baradat/AFP via Getty Images)
US News

A federal law enforcement officer who was taken into custody at the rally in Washington over the weekend will not be charged even though U.S. Capitol Police officers said he was illegally carrying a gun on Capitol grounds.

Anthony Belli, 27, of Toms River, New Jersey, was seen being arrested at the rally, which was held to protest how some accused of wrongdoing in the Jan. 6 Capitol breach are still being held in prison.

USCP officers escorted Belli from the scene without placing him in handcuffs. The USCP later said the man was arrested on an unlawful activities charge related to his having a firearm on him.

The U.S. Attorney’s Office in the District of Columbia, though, “does not plan on filing charges against the individual you’re describing,” a spokesman told The Epoch Times.

The man works for Customs and Border Protection (CBP), a spokesperson for the agency told The Epoch Times in an email.

The agency “is aware of the arrest of an employee and is fully cooperating with the investigation,” the spokesperson said, adding: “CBP stresses honor and integrity in every aspect of our mission and expects officers to adhere to the oath they take to uphold the laws of this country. CBP will continue to support any criminal or administrative investigation of alleged misconduct by any of our personnel, both on or off duty.”

An official said that Belli was not on official duty when he was arrested and that the Department of Homeland Security’s Office of Inspector General was notified of the arrest.

Belli could not be reached.

The USCP said it couldn’t provide more information on the matter, including what officers had learned about the federal officer.

“We can’t speculate why people were in the protest area. We don’t talk about an arrestee’s potential employment,” a spokesperson said in an email.