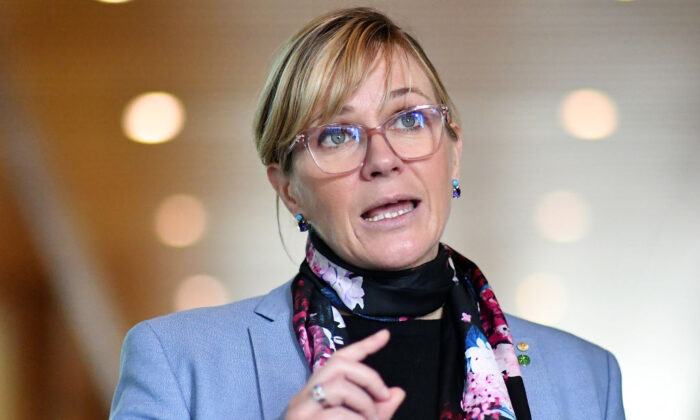 Federal Member for Warringah Zali Steggall during a press conference in the Mural Hall at Parliament House in Canberra, Australia, on June 22, 2021. (Sam Mooy/Getty Images)
Australia

Zali Steggall, the independent federal MP for Warringah and high-profile renewable energy campaigner, has admitted she made a “rookie error” for not properly disclosing AU$100,000 (US$71,360) in campaign donations from a former coal company director.

Steggall is facing pressure after it was revealed the Australian Electoral Commission (AEC) had discovered she received $100,000 in 2019 from the Kinghorn Family Trust—belonging to John Kinghorn, the founder of RAMS Home Loans, who was previously a director for Cascade Coal and Felix Resources.

However, according to the Sydney Morning Herald, discrepancies emerged regarding the financial reporting of the donation.

The $100,000 was donated from the Kinghorn Family Trust to a Warringah Independent Ltd.

Yet, during an AEC audit, it found Warringah had reported the $100,000 as eight separate donations valued at $12,500 each, with eight separate receipts issued as well.

The $12,500 amount also comes under the minimum threshold for disclosure, which is currently at $13,800.

The financial controller later amended its returns in 2020 as a full sum after review by the AEC.

Steggall, who unseated former Prime Minister Tony Abbott from the inner-city electorate of Warringah in north Sydney at the 2019 federal election, has been an ardent advocate for transparency in politics, as well as for renewable energy.

“Public trust in politicians has been eroded over time, some of that erosion is due to their propensity to lie and the lack of accountability,” she said in her maiden speech to the House of Representatives in Parliament.

Grassroots campaign group GetUp, who played a major role in Steggall’s campaign in Warringah, has also been vocal on introducing a “ban on corporate and union donations.”

Meanwhile, Steggall claimed it was a “rookie error” and blamed the accountant for not disclosing the sum properly.

“Unfortunately, the accountant failed to raise that there had been a single cheque issued,” she told ABC Radio on Feb. 15.

“It does highlight the difficulty of challenging incumbents but also of coming into the political system where the parties just absolutely have that level of influence on how it’s done,” she added.

The member for Warringah earlier responded in a statement that initial media reports had been misleading.

“I received eight individual pledges from a large family living in my electorate. The AEC later considered it to be one single donation, so the return was amended in 2021 to reflect that,” she said.

“If you ruled out taking donations from anyone who has invested in coal at one time or another, you pretty much rule out everyone as most people have through their superannuation,” she added.

“(Steggall) receiving a $100,000 donation from big coal investors, then claiming to have never met them, then not bothering to find out anything about who donated $100,000, but covering up the donation, and then covering up the cover up,” he wrote on Twitter.

While Australian Prime Minister Scott Morrison said the matter was difficult for Steggall to explain.

“There are a lot of people who are happy to throw stones, but they’re often in glass houses,” he told 2GB radio.

“We’ve introduced new laws into the Parliament to go and impose on (independents) the same transparency and disclosure arrangements that the political parties face up to.”